On assignment for Sports Illustrated, Darren Carroll got in the back of a van with a group of rodeo cowboys to hit 6 rodeos in 5 days, over 4,000 miles of roads from Colorado to Wyoming. Many other riders take similar journey each year during peak rodeo season, from the end of June to early July. At stake are enormous amounts of prize money. That’s why they call it Cowboy Christmas.

This journey would take Darren not only to the front row of American bull riding, but also into the wild life of its riders, and there sleepless road trip which involves pan-frying meats in a van at 70 miles an hour on an illegal gas grill.

We asked Darren about what it was like to photograph Cowboy Christmas.

Let’s start off with the root question. Why six rodeos in five days?

For about two weeks of every year, right around the end of June/beginning of July, the American professional rodeo schedule is so packed with events, with so much prize money to be won, that it has come to be known as “Cowboy Christmas.”

Now, a rodeo can last for days, with a performance (what we would probably refer to as a “round”) every night, but a cowboy can only ride in one “perf” per rodeo, after which point he has to move on. So the trick for a cowboy is to enter as many rodeos as he possibly can, trying to find a place to ride every night if possible–but since they are all in different cities, and possibly hundreds if not thousands of miles apart, getting a schedule coordinated, and getting from one to the other, can be quite a challenge both logistically and financially.

What was it like spending so much time hanging out with and shooting people who actually do rodeo?

It’s a pretty amazing experience, especially given the nature of most other sports that I cover. Just about everyone involved in rodeo or charreria is extremely outgoing, and there’s a certain selflessness and humility to rodeo cowboys and charros. Which is not to say they are not focused–this is serious business and these are athletes — but much of the egotism and arrogance of the more “big-time” professional sports is, refreshingly, missing from the rodeo and charreria cultures. 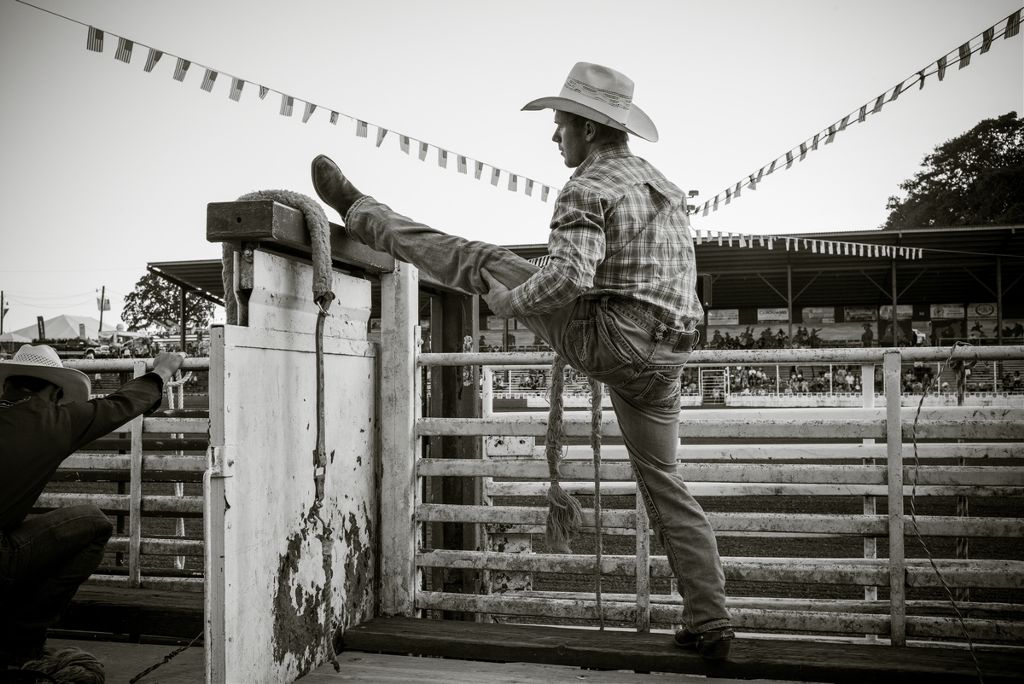 What did you learn about the cowboy lifestyle?

First off, I learned that I wouldn’t want to live it! Don’t get me wrong, it was a great experience but the nomadic life is not something I could see myself pulling off–for four days, we slept in a van, with only one meal eaten at a table and two opportunities to take a shower, for the most part living off of bad gas station coffee, trail mix, fast food, Red Bull, and, when the time came to go to work, adrenaline.

There is a certain well-deserved romanticism attached to the notion of an itinerant “cowboy lifestyle”…. but it’s a hard life, physically and mentally demanding, and there’s a lot more to it than just having the ability to stay atop a 2,000-pound animal for eight seconds.

What was your most memorable moment from this experience?

On the second day of our trip, we left Prescott, Arizona at 10 pm for the drive to Molalla, Oregon. This is a drive of 1,327 road-miles, which take 22 hours. The rodeo there was scheduled to start at 8 p.m… it’s a wonder we even made it at all.  Anyway, the need to press on without stopping for anything but gas brings me to my most memorable moment from the entire trip…cooking in the van.

Cowboys need to eat, after all, and these guys had rigged up a most ingenious way to eat on the run. It was a wooden box with a flip-top lid, about 1 foot square and 2 feet tall, that could be wedged precisely into the space between the driver’s seat and passenger seat. In it’s normal configuration it provided a nice armrest… But flip the lid up, and on the underside was a plastic cutting board, and it gave way to a simple gas stovetop burner, fed by a container of camp-stove sized propane.

I seriously doubt this was a street-legal arrangement, but the boys fired it up twice that day, utilizing a skillet that was stored under one of the back seats, species that lived in the passenger seat-back pocket, and meats, butter, and tortillas from an ice-filled cooler we’d stocked during a stop in Flagstaff the day before. And there we were, barreling down a California highway at 70 miles per hour, with a gas stove burning in the van, cooking sausage and egg breakfast tacos in the morning and beef fajitas in the evening. I’ve never seen anything like it.

Stay tuned for part II of our interview, where we ask Darren about shooting Charreada in Texas — the Mexican version of bull riding. 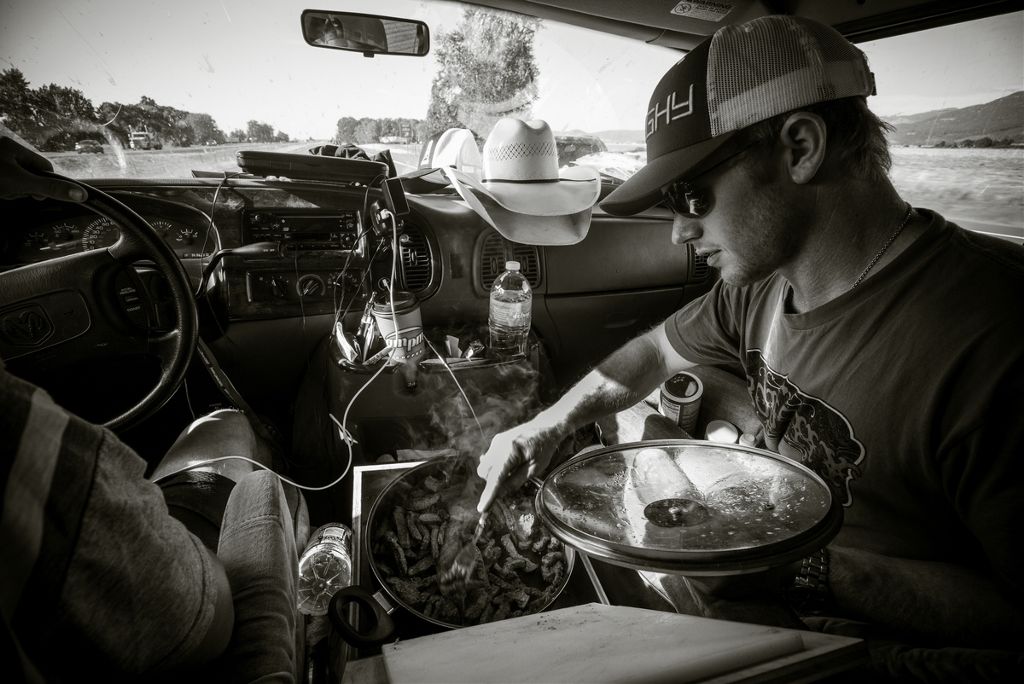 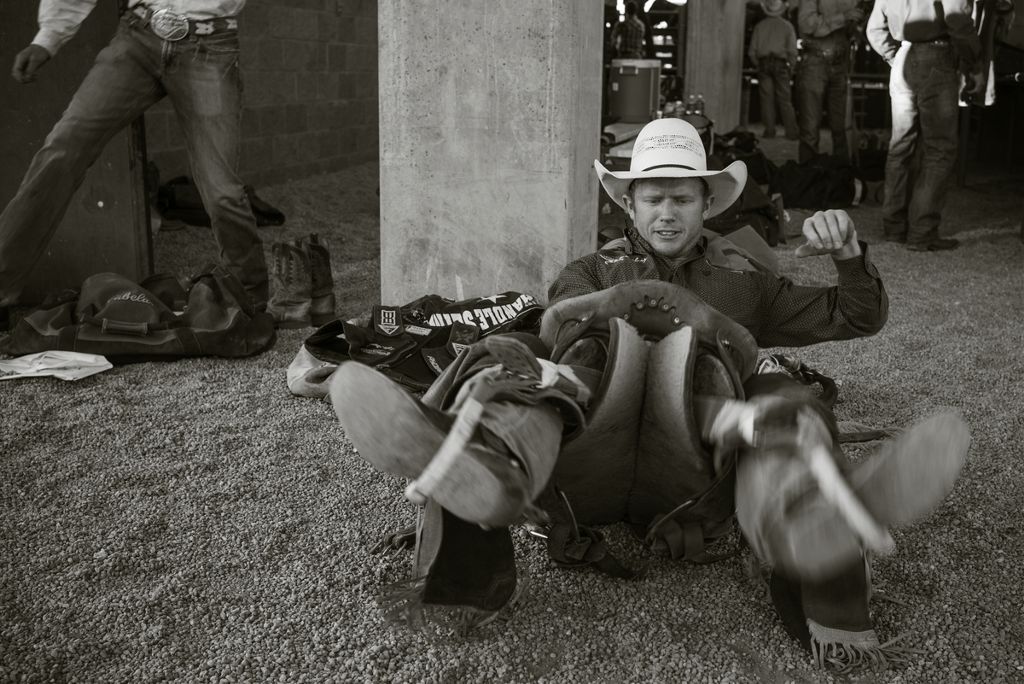 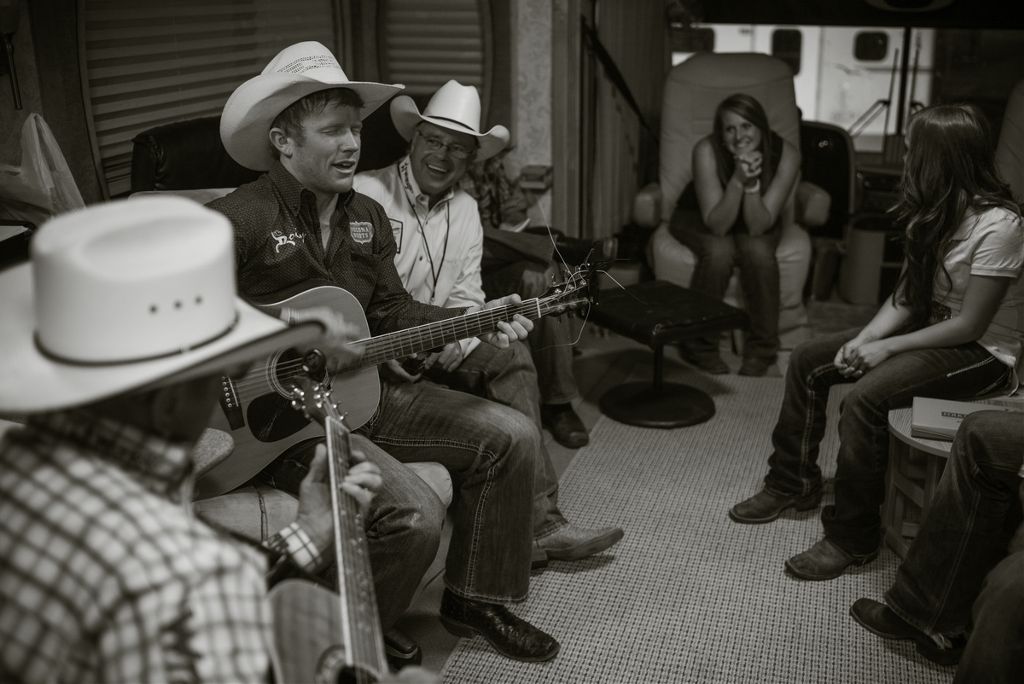 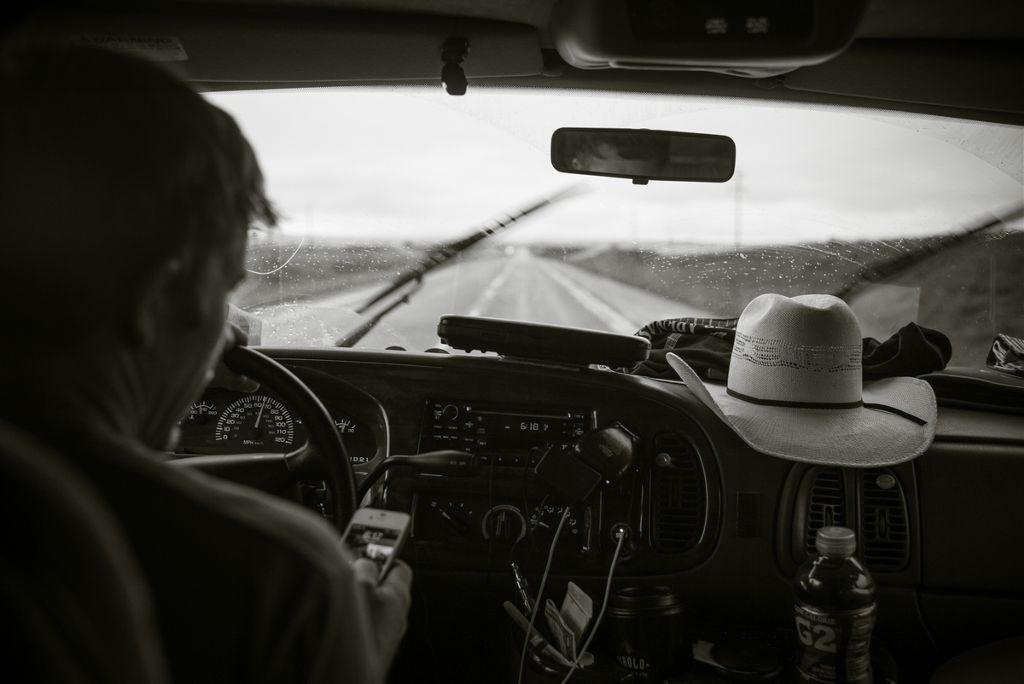 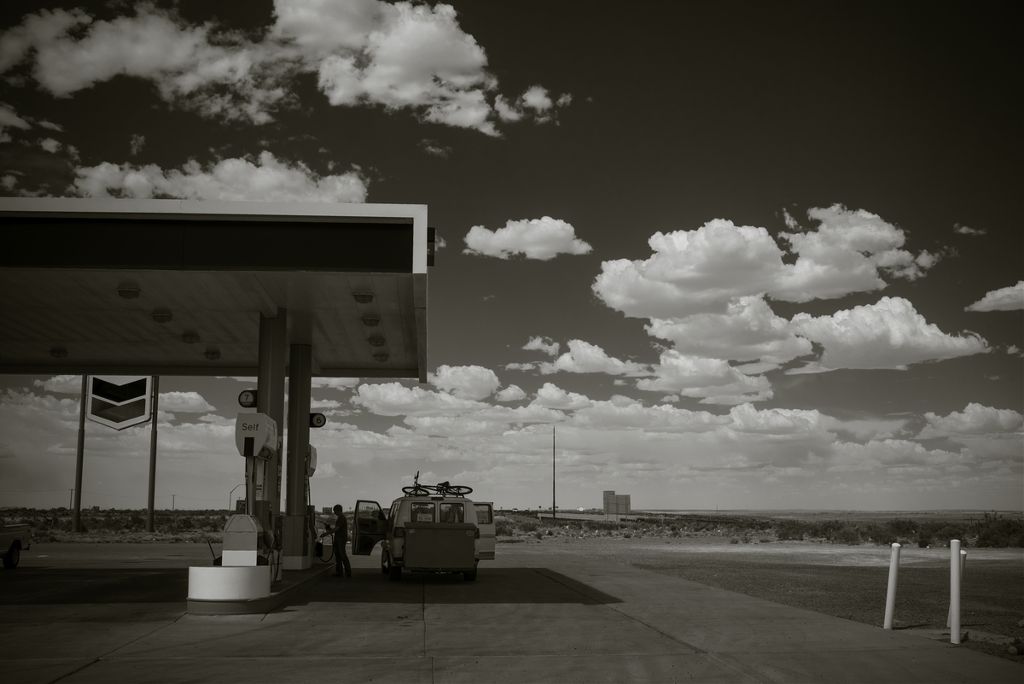 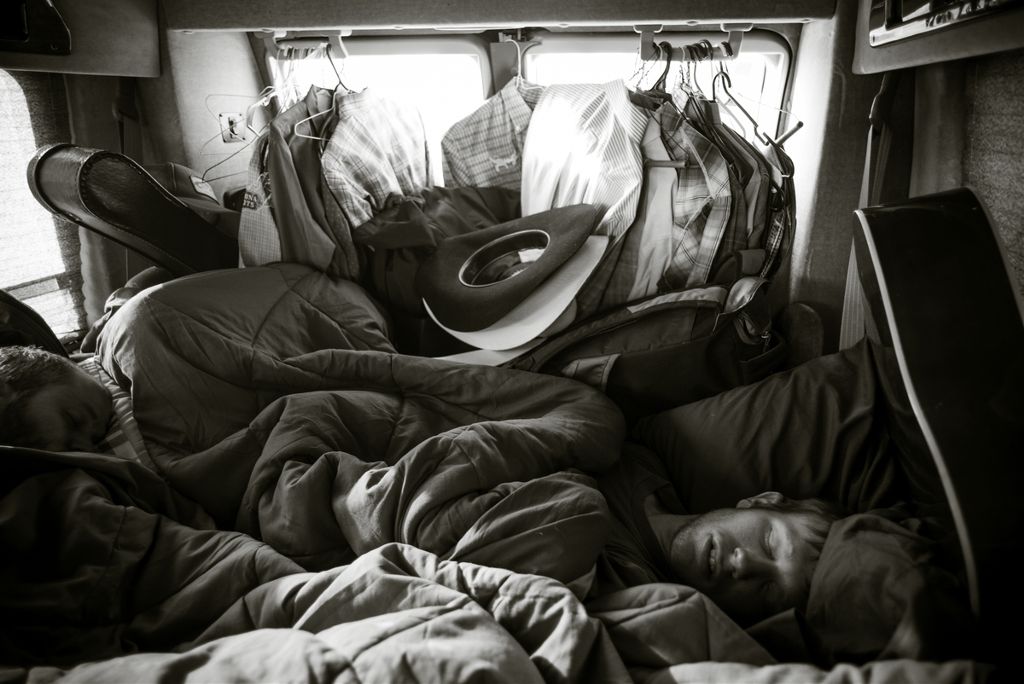 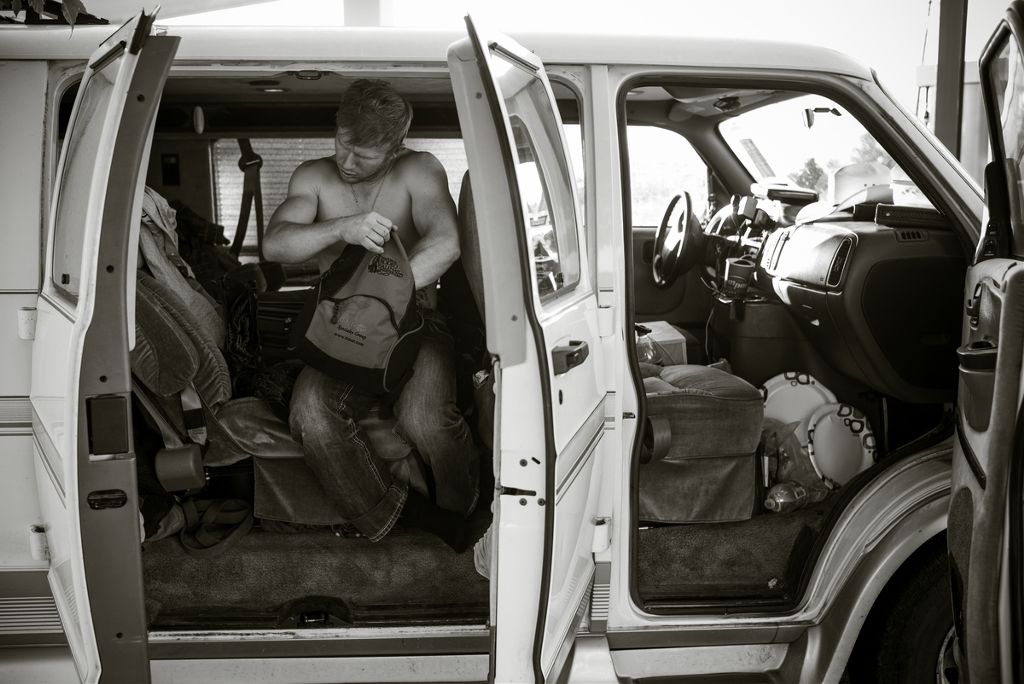 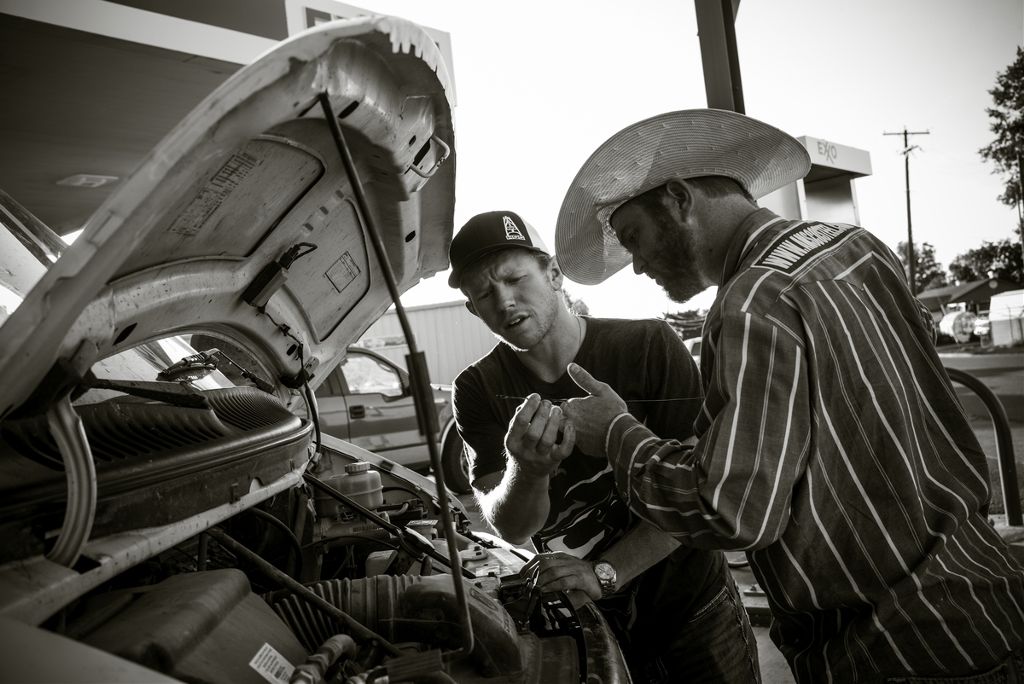 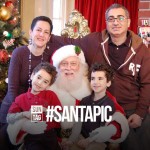 Share Your Pictures with Santa with the Sunday Hashtag #santapic 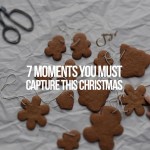 7 Moments You Must Capture this Christmas