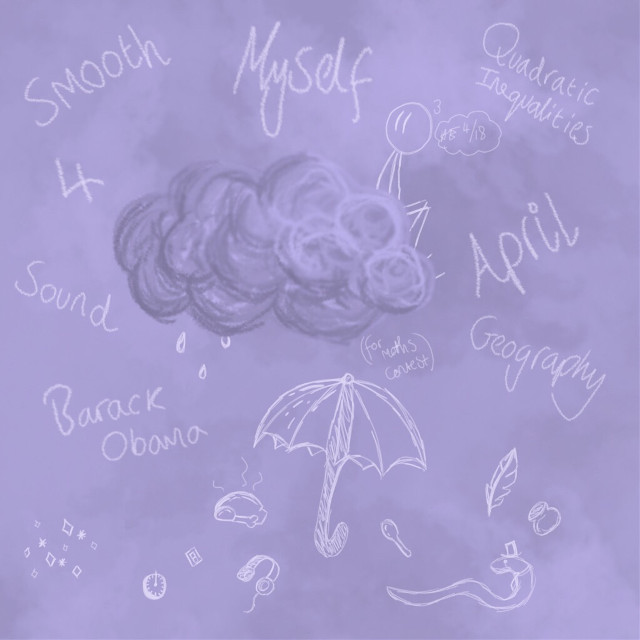 My entry for @mothsupli 's contest
WARNING: Im a complete dork. Idk, this interests me so i spend a lot of time thinking about it.
So i have colour synesthesia, meaning things in my life are just colour coded. Sometimes its obvious- an orange is orange- and sometimes its not, as you are about to see. I picked mauve because there arent that many things in the grand scheme of my mind that are this colour. I like the colour and idk.
Well, um without further ado:
Smooth~ smooth, rough and matte are about the only textures for me that have colour. Smooth just happens to be mauve.
Four~ When combined with some numbers this can be a much deeper purple (which is quite a rare colour for me) but it's generally mauve, especially against white backgrounds and during springtime.
Barack Obama~ a weird one. Yes, Donald Trump is orange in my head. But then, Vladimir Putin is a stark dark blue, so there's really no pattern with people. Certain groups of friends form certain colours when their together, but people on the whole are random. They are rarely any shade other than Orange (ranging from bright to more peachy/cream/grey oranges) and Dark Blue. So Obama being a mauve person is just interesting to me.
Myself~ you'd think that yourself would be your favourite colour, but to be perfectly honest, other than Wednesday and the number Three, the colour green (my favourite) just doesn't crop up in anything. Heck, even grass is a reddish thing. No idea why I'm mauve. The letter my name begins with is also this colour so the correlation might be there but I'm not saying I'm like Barack Obama, my favourite number is not four, my favourite texture is not smooth (it's climbing wall, the perfect roughness)... So yeah, mauve, that's me.
Geography~ I imagine I could've enjoyed Geography, but our class had a bit of a Harry Potter DADA experience, in that every year we got a new teacher. None of them were particularly good and none of them stuck to any form of curriculum. The last and final teacher I had, I decided to be a cocky prick and have a fuck about with the exam paper and put dumb answers, which in all honesty, the poor teacher didn't deserve, but what's done is done. I'm really regretful of it though. It was a damn easy exam and I could've had the decency to do it to my full ability. Okay these captions are getting so long.
April~ the month of Spring, think pastel Easter eggs etc. Etc. April often changes between the pastels, but this year it's most definitely mauve.
Quadratic Ineqalities~ for anyone who doesn't know, it's an area of quadratics in maths where you have an Inequality and its a quadratic graph that you have to solve. Anyway, no idea why this is mauve but that's the colour that goes along with it.
Sound~ this is another weird one. It's not sound itself that's mauve, but lots of sounds are. It the word sound that's this colour. It's my other weird sensory quirk that's to do with sound, and this is the one that causes me grief. Misophonia, it's essentially an adverse reaction to certain everyday sounds. They make you stressed, angry, uncomfortable... Like you want to implode. It's a disorder where these trigger sounds (chewing, lip smacking, rustling, pen clicking, whispering) set off a part of the brain called the Amygdala- the freeze, fight, flight part. Your rational brain tells you the sound is harmless, but the rest of you becomes tensed up, your heart races etc. Because your Amygdala comes from the times when we lived in caves and had to be ready to fight bears, and it's still not caught up. Anyway, that was a long tangent, but yep that's also mauve.
Then there's some other random stuff. Quills and ink pots; umbrellas; headphones and oven dials; along with a well-to-do worm character that I used to draw lots a couple years ago; sparkles and light switches; spoons and roast chicken. Semi colons are also mauve.