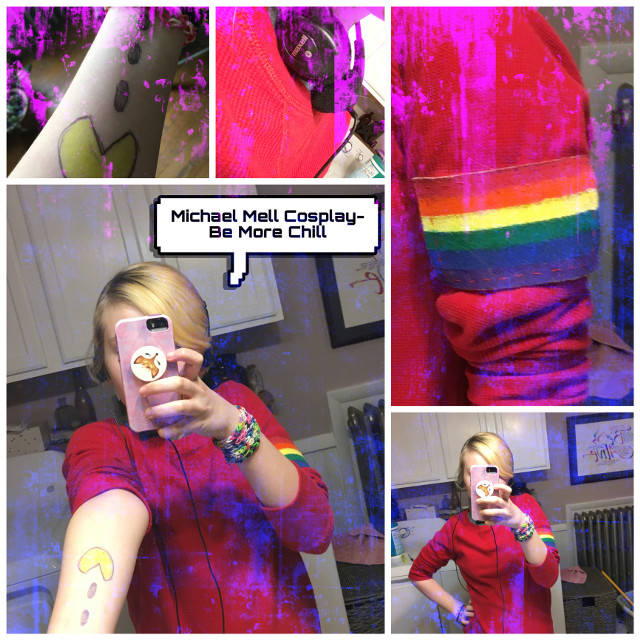 Edit This ImageAdd TextRemove BackgroundAdd StickerAdd Color ExposureAdd Effects
59 users liked this. Sign In to like this
59
Sign In to save it to your Collection
2
Views
3,181


I am Michael now. This isn’t a super accurate cosplay because it was just stuff I had lying around the house, but I like it. The hoodie was my mom’s old jumper (yes I’m aware that’s an English term and not commonly used by people in the US, but I couldn’t think of another way to describe it so deal with it.

) It doesn’t have a hood, but it was the closest thing I had on hand. I actually made the pride patch myself out of felt and fabric paint. I know he’s supposed to habe tons of patches but I didn’t have any other ones to put on the shirt. The headphones were just ones I had laying around from like first grade or something. They aren’t as big as Michael’s, but eh, close enough. The pac-man tattoo was a must have, so I just drew on my arm in sharpie, lol. I’m proud to say that I made this without spending a single dollar. It was fun to make! I think I might keep the “hoodie” and just wear it because I like it!

Also, my friend and I did a little “6-feet-apart” hangout in a parking lot. I was dressed as Michael and she was Jeremy. We blasted Beetlejuice and danced.


It was dope.
(Do people even say that anymore? Idk I’m not “cool” lol)


Also, if you made it this far, like thank you for sticking around for the whole description. Idk why anyone cares about all of this random stuff but whatever