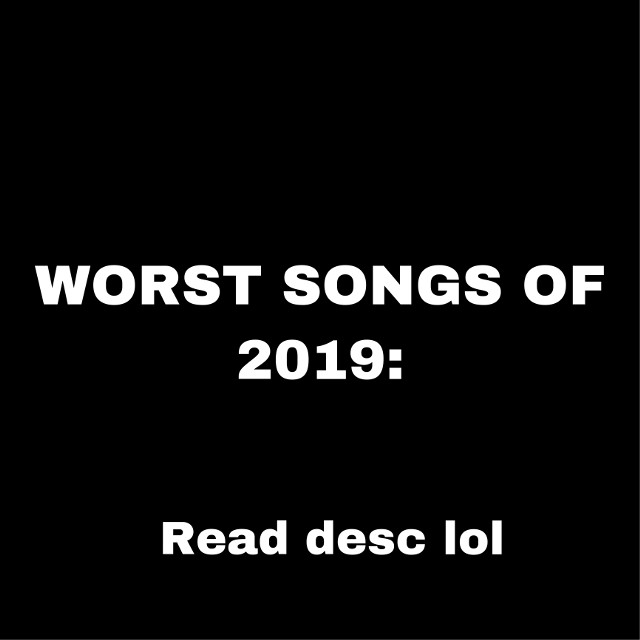 Before I start I just Image by Homo supporting cast

Before I start I just wanna say that if we’re friends and I totally just trashed your favorite song I’m sorry pls don’t kill me
This is kind of my internal mind so uh
Welcome?
U know what Imma just start
WORST POP SONGS OF 2019 (not in a specific order)

~ THAT ONE MAROON 5 SONG BY MAROON 5: I literally don’t know the name of it because it sounds exactly like the rest of the Maroon 5 songs. K so I just looked it up and it’s called Memories. I can tell you it’s based off of 4 fuckin chords and Adam Levine didn’t even try to hide it. It’s basically a remix of Johann Pachebell’s Canon in D with supposedly deep lyrics added on top of it. It would have been deep if Adam Levine totally didn’t drag and drop cheering sound effects in the beginning. I hope he didn’t do that cuz that would have been a total disaste-
Oh wait.
He did.

~ Earth by Lil Dicky: Dude this song I- it’s so ridiculous it makes me laugh. I love hating this dude. Basically Lil Dicky tried to be inspiring but he has literally no emotional depth so he ended up paying Taylor Swift, Brendon Urie, and Katy Perry to make butt jokes to cover up his horrible rapping.

~Worth It by YK Osiris: The meaning of this song is so objectifying and shallow, not to mention YK Osiris Can. Not. Sing. I don’t know if I just hate songs with this title *insert Worth It by Fifth Harmony* but the song is literally about how YK Osiris is gonna let a girl sit on his dick cuz she’s ‘worth it’. Dude the girl probably deserves better. NOT TO MENTION Osiris had to go to court not long after because he got into an argument into his girlfriend when she found a photo of a naked woman on his phone, so he strangled her and bit her on the face.

~Someone You Loved by Lewis Capaldi: This song sounds like music written by a caveman who discovered music five minutes ago. It’s only redeeming quality is the fact that he straight up says what he’s going for (he failed but ya know

~One Thing Right by Kane Brown ft. Marshmello: I rather like Kane Brown. My problem here is Marshmello. (His real name is Chris Comstock btw, aka Dotcom the DJ) Everything Marshmello touches turns into shit because everything he makes sounds exactly the same. The same weak beat, the same weak synthesizer, can he just stop?

~ROXANNE by Arizone Zervas: If this is what gets to be number four on the Top 50 US chart of most streamed songs on Spotify, then I would rather put Beauty And The Beat by Justin Bieber on the chart. If this is what Tik Tok has done, then I want to go to China, buy a T-Rex, and destroy the Tik Tok headquarters.

Damn that was long.
The end for now