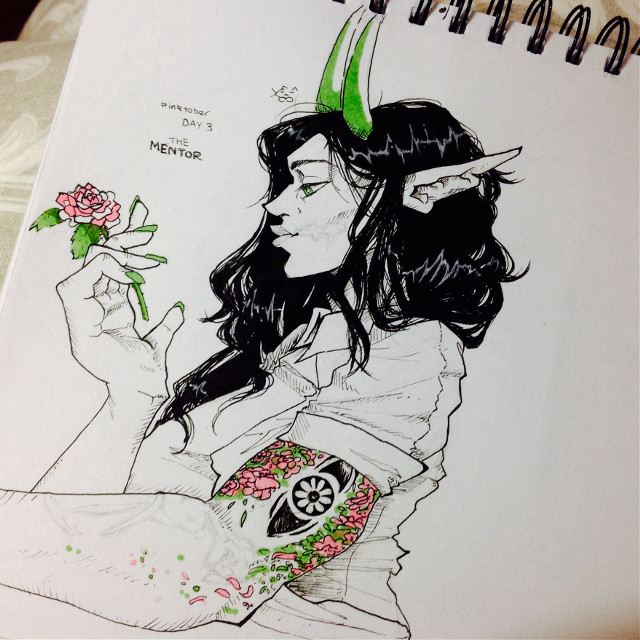 inktober drawing art oc Image by Oh god it's BACK

Physical Description: 6'5", built, a lot of scars down arms and along left cheek, horns (3cm base, 28cm high), grey skin, floral sleeve tattoo on left arm
Personality: chill, mom friend, good advice giver, worries a lot about others, swears but tries not to, doesn't get enough sleep between running the diner and her sorcery courses.
Sexuality: Pansexual
Setting: Rowe

Ongoing story: Elsa's older sister. Usually at the diner where most people gather, and is completing their degree of potions (third year)

Background story:
Lola was born in South MePiya, and fended for herself since day 1. After her mother died when she was 6, Lola begged, borrowed and stole her way through life and lived in poverty for the most of it, entering fights to make the majority of her income. During a fight when she was young, her opponent split her cheek open and the scar has remained since.

When she was 14, she found a toddler, Elsa, in a garbage dump when searching for food. At one point she considered eating it, but instead chose to shelter her until her parents came back... Which they never really did. Lola grew very attached to Elsa, and thinks of her as a little sister.

They immigrated to Rowe when she was 20, where she took up several jobs to pay for Elsa's education (deliveries, cooking, hired burglar etc.), and lived in an abandoned restaurant for a few years before renovating the place to become the Pink Cactus Diner. She's befriended a lot of her customers, which has come in handy and made her diner a safe haven/ turf-war-banned zone.

While she doesn't feel comfortable with Elsa's illegal work as a familiar of the Stidolph family, she encourages her to train and makes Elsa's safety a priority. Nowadays, she takes night classes for a potions course, manages the diner with Elsa during the day.