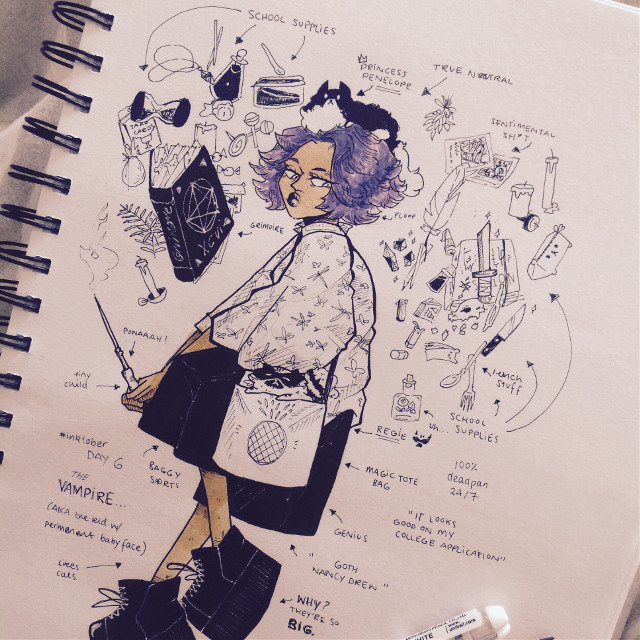 inktober vampire Image by Oh god it's BACK

Ongoing story: student at Northshore who's studying magic and witchcraft, particularly hexes and spell casting, usually hangs out with younger students since she doesn't have many friends beside her familiars, Regie (raccoon) and Princess Penelope (cat)

Background story:
Yoko wasn't originally from Rowe. Her parents came from a country called Celeste, but when her mom got in a lot of debt, her father ran away with the kids to a shitty house in Rowe when Yoko was 6, and she's never seen her since. While Sen kind of tried at being a dad, he wasn't very good at it and ended up on the streets. Yoko was moved into a new family under a permanent care order by the government, and while her care order family isn't exactly rich, they support her wholly and put the best efforts into making her life the best it can be. She ended up feeling incredibly guilty and indebted to them.

At 15, she earned a fully paid scholarship to Northshore (an elitist school) on account of her talent to cast difficult spells and her heightened perception of magic elements, but didn't really interact with enough people to make friends, and went about school for 3 years with only her familiars as her friends. She met Elsa in the nurses office at the start of fourth year, when Yoko had a spell go wrong and Elsa had been in a fight, and the two kind of bonded in a weird way. Because of that, she made a group of friends through Elsa. The same year when she came to one Elsa's ice hockey game, she met Molly (the team captain) who hit on Yoko thinking that she was a junior (lmao NOPE Yoko's a year a bit older, just very small). They became pretty good friends and eventually ended up dating.

Nowadays, she spends her time studying towards her final exams, working between her internship at a detective agency and job at the Pink Cactus.

- has a grimoire of original hexes as part of her folio subjects
- her aunts are both witches like her, and own an enchanted items shop to make ends meat
- has her drivers licence, motorcycle licence, and brooms licence
- Elsa built her a customised broom, with seats for Reg and PP
- her subjects include "Magic in the 21st century," chemistry, extended mathematics, literature, Defence against the Dark Arts, "Witchcraft: A History," and legal studies