It’s no secret that colors can change the entire look and feel of a design. A splash of chartreuse can brighten, a blue-purple can add regality, or a lilac can add a subtle, feminine feel to any graphic design. The vast array of color combinations makes it possible to create a spectrum of different moods and styles with just color choice. Yet choosing just the right shade can be tricky. So, how do you choose the right colors for your designs? The answer lies in the color wheel and a basic understanding of color theory.

What is color theory?

Color theory isn’t just one theory but actually a scientific and artistic practice. A thorough understanding of color theory centers around defining colors, classification of colors, outlining relationships between colors, and how to make adjustments to create new colors. Because it also covers how humans perceive colors, color theory is the foundation of color psychology. Core to color theory is the color wheel, which is used to organize different colors and visually show how they relate to each other. 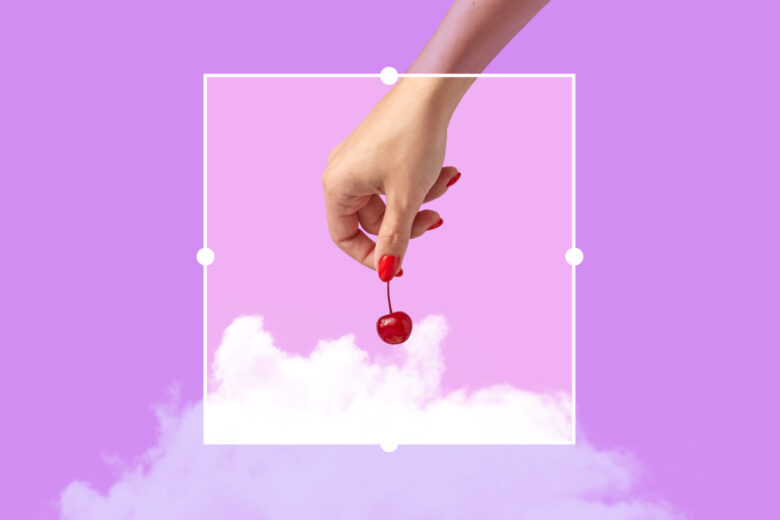 Aristotle developed the first known color theory, which viewed color to be the product of a mixture of white and black (lightness and darkness) and related them to the four elements of water, air, earth, and fire. He believed color was sent  from heaven through celestial rays of light and considered black-and-white drawings as the most beautiful. This belief prevailed until 1666 when Sir Isaac Newton’s prism experiments provided the scientific basis for color theory.

Newton proved that a prism breaks up white light into a range of colors, which he called the color spectrum. He also showed that the recombination of these spectral colors recreated white light. The rainbow used to have just five colors until Newton added orange and indigo to the list and made it seven by analogy with the seven notes of the musical scale. There are even little rhymes in English to remember the seven colors of the rainbow (red, orange, yellow, green, blue, indigo, and violet) – “Roy G. BIV” for Americans and “Richard of York Gave Battle In Vain” for the British.

Of note: there are no pure colors in Newton’s rainbow – they all blend into one continuous spectrum.

In 1802, Thomas Young demonstrated that he could generate any colors that could be seen by mixing different proportions of the three primary colors of light. For example, you could mix two parts of red light with one part of green light to get an orange color. And using more green light than red light would create a yellow-green light.

Meanwhile, Goethe’s Theory of Colors (1810) took a holistic approach to color, reflecting on the effects of light and dark on human color perception. Goethe disputed Newton’s idea that darkness was just the absence of light. He instead insisted that darkness was an active ingredient in the production of color. His color theory formulated a philosophical account of the way we experience color as a phenomenon, including the psychological aspects of colors and their relationship with human emotions and behaviors. Goethe’s theory had a significant influence on twentieth-century painters also greatly concerned with the psychology and mysticism of color.

A century later, Wilhelm Ostwald began to develop a systematic color theory as well as a quantitative color science in 1914. His theory provided a scientific scheme for creating perfect tonal balance and harmonious color composition in an “ideal” painting. Ostwald believed that a scale of perceptually equal steps in the brightness of color could be achieved by adding black and white in ratios that followed a logarithmic progression, but most of his contemporary artists rejected to accept such a rigid program for art.

Albert Munsell’s color theory is considered the most comprehensible, systematic, and scientifically sound theory. It laid the foundation for contemporary computerized color matching systems such as Pantone. His theory based on “perceived equidistance,” established an orderly system for accurately identifying all colors. Munsell quantified and standardized colors according to HVC: hue (the basic color), value (lightness), and chroma (color intensity or saturation).

What is a color wheel? 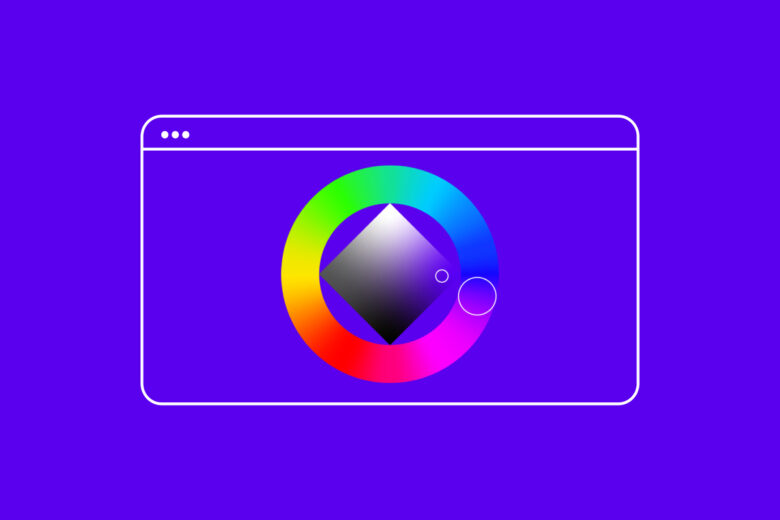 The first color wheel was created by Sir Isaac Newton with red, orange, yellow, green, blue, indigo, and violet arranged into a natural progression on a rotating disk. The complementary color wheel, developed in 1855 by Michel Chevreul, influenced Pissaro, Signac, Seurat, and even Van Gogh and Matisse, and greatly facilitated the study of complementary colors in their works.

How does a color wheel work?

A dividing line splits the color wheel into warm and cool colors. Warm colors are red, orange, and yellow. They are vivid, energetic, and evoke warm feelings. Cool colors, on the other hand, are green, blue, and violet. They evoke calmness and create a soothing impression. White, black, and gray are considered neutral colors.

What are popular color combinations? 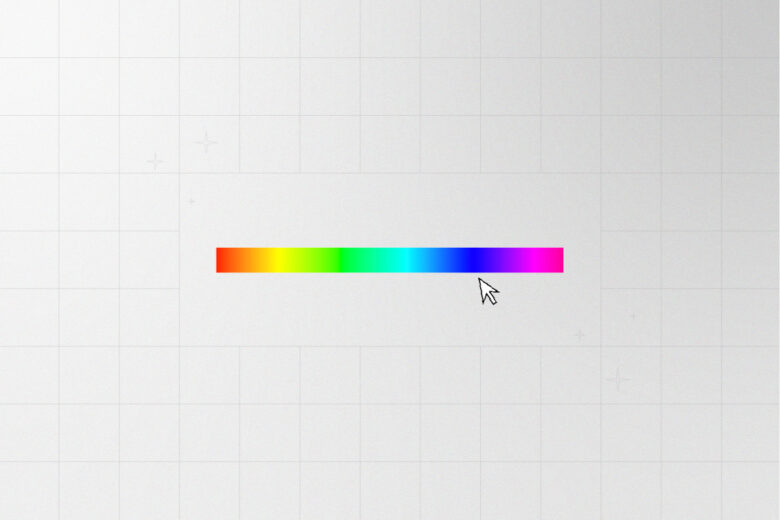 Check out the below complimentary pairings and consider using them in your next graphic design or color printing project.

Monochromatic color combinations are comprised of different tones, shades, and tints within a specific hue.

Analogous schemes are created by using three colors that are next to each other on the 12-spoke color wheel. They all have the same chroma level, but by using tones, shades, and tints we can make these schemes original.

Complementary combinations are created by combining colors from opposite sides of the color wheel.

Split complementary schemes add more complexity by using colors on either side of the hue opposite your base hue. Avoid using colors that are exact opposites with the same chroma and/or value right next to each other either by leaving negative space or by adding a transitional color between them.

Tetradic schemes are based on two adjacent colors and their complements. They are difficult to balance in a harmonious way. The best way to proceed is to use one color as the dominant color and use the other three as accents.

Custom combinations are the ones that don’t follow any of the predefined traditional schemes described above. Go wild and create your own custom color palette with a beautiful array of colors. 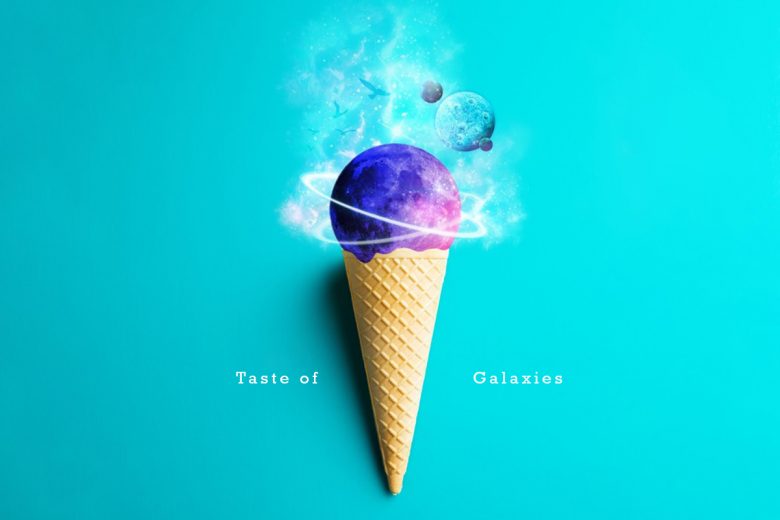 Whatever your color palette preference is, you can create it by picking colors from the color wheel or by inputting a RGB color codes to get a precise color.

Here is a step-by-step guide to creating your dream palette:

1) Open the Picsart app and tap the + icon to start a new project. Select a photo from your camera roll or search from Picsart’s #FreeToEdit photo library or tap Create New.

2) Tap on Draw then on the Color Chooser.

4) Tap the checkmark to confirm your color choice before using it. Repeat a few times until you have a custom color palette that reflects the color palette in your image.

5) When done, tap Apply to save your work, then Next. You can then Save and/or Post your custom color palette with the Picsart community. 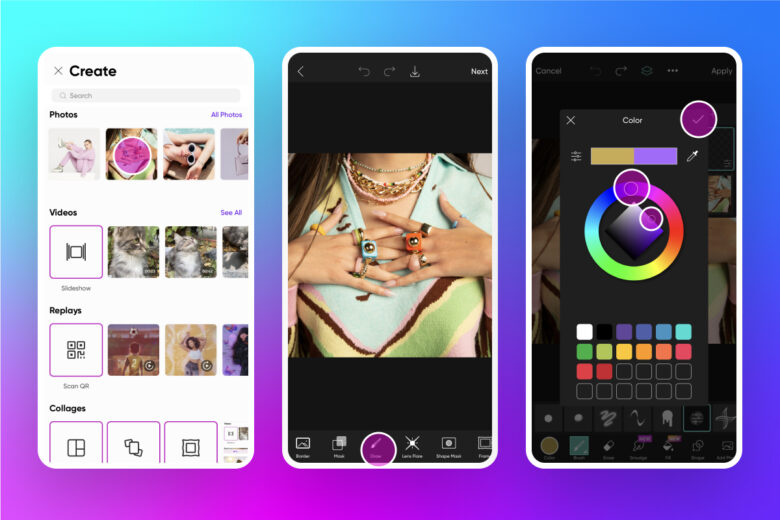 Picsart is a photo and video editing platform and creative community. A top 20 most downloaded app worldwide with over 150 million monthly active users, its AI-powered tools enable creators of all levels to design, edit, draw, and share content anywhere. The platform has amassed one of the largest open-source content collections in the world, including photos, stickers, backgrounds, templates, and more. Used by consumers, marketers, content creators and businesses, Picsart tools fulfill both personal and professional design needs. Picsart has collaborated with major artists and brands like BLACKPINK, Taylor Swift, Lizzo, Ariana Grande, Warner Bros. Entertainment, iHeartMedia, Condé Nast, and more. Download the app or start editing on web today, and upgrade to Gold for premium perks!

How to create the laser eye meme effect using Picsart

How do you make an image transparent?