You’ve likely heard of the color indigo, but what do you know about it? What is indigo color? According to the visible color spectrum, indigo is one of the seven colors of the classic rainbow, but that’s pretty much where knowledge stops for most. So, today we’ll deep dive into everything there is to know about this most mysterious of hues, including the indigo color meaning, indigo color code, indigo color palette, and much more.

Indigo: a color of the rainbow 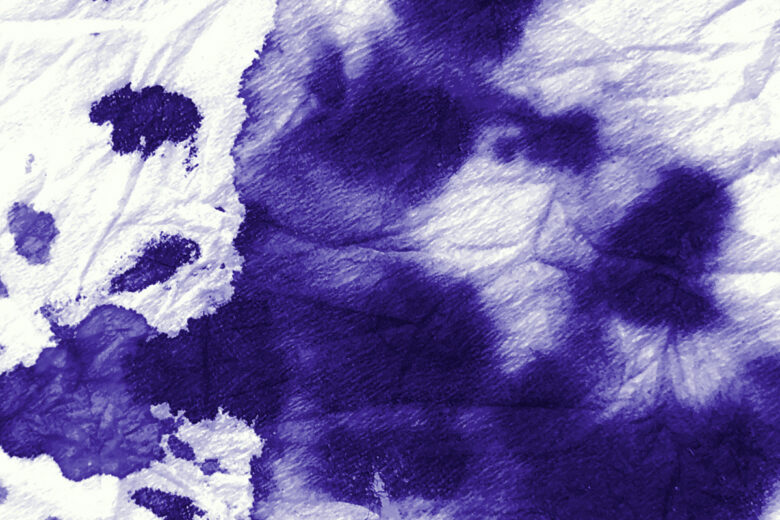 Let’s throw it back to elementary school for a minute. Remember ROY-G-BIV? It’s a clever acronym that stands for the colors of the rainbow in order: red, orange, yellow, green, blue, indigo, and violet. But in some quarters, it seems that indigo has disappeared from the rainbow of late. So, why was indigo originally included in the rainbow? In 1655, Sir Isaac Newton started experimenting with prisms and explored how light passed through them at certain angles to form different colors. The seven colors he named became the official colors of the rainbow.

Did he actually see indigo? The light humans see are wavelengths from the visible light spectrum, originating from the sun. The human eye doesn’t readily differentiate hues in the wavelengths between what’s now called blue and violet. Some say he only saw six colors but decided that there must be one more to make it a total of seven. On a spiritual and mystical level, the number seven had more significance. At the time there were seven planets, seven notes on the musical scale, and seven days in a week. He chose to include indigo as the seventh color. A popular blue color dye called the Indigo Dye had been newly imported from the Indies that may have influenced his decision.

Why is it called indigo? 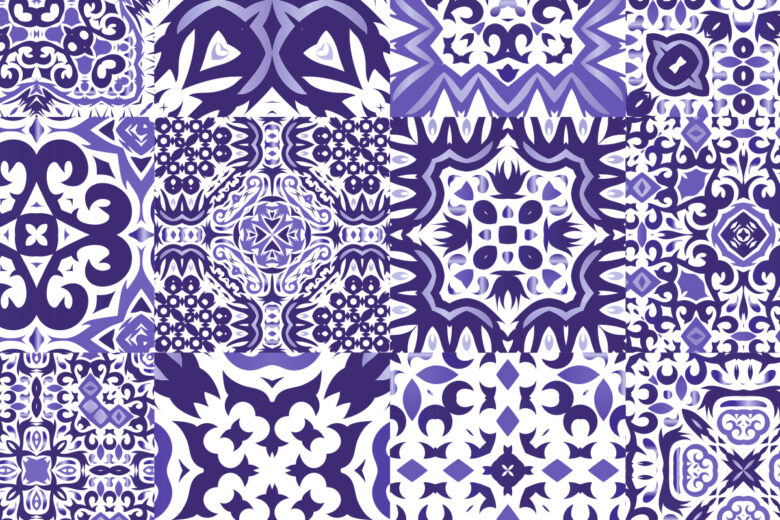 Indigo got its name from a plant discovered in the Indus Valley about 5,000 years ago. The indigo plant was called nila, meaning dark blue. By the 7th century B.C, people began using the plant as a deep blue dye. The Mesopotamians, for example, carved out recipes for making indigo dye into clay tablets. By the late 1200s, news of the popular blue dye made its way to Europe by way of Venitian merchant traveler, Marco Polo. By the 1600s, indigo grew in high demand across Europe and America, famed for its blue violet allure.

The history of indigo color 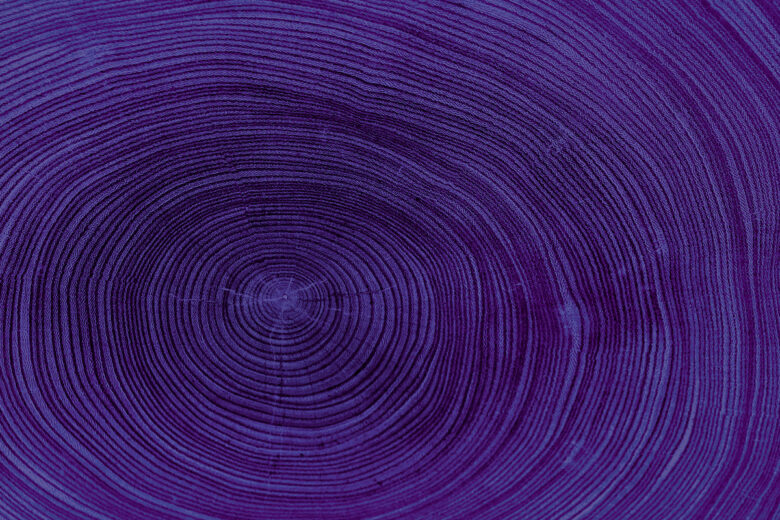 The story of indigo took an interesting turn in the late 1700s, as British demand started to decline and the American War for Independence began in 1775. The British began trading indigo once again by making the dye in India and unfortunately heavily exploiting Indian workers throughout the process. The maltreatment of the dye workers sparked revolts and riots in the 1860s, to the point where Mahatma Gandhi’s first act of peaceful civil disobedience was in support of the indigo workers. He even went to court to fight on their behalf for better wages and improved working conditions.

On the other side of the world, love for indigo continued to grow. Americans used it to make work shorts with indigo blue collars that showed less dirt and stains than white collars. In 1873, Jacob Davis and Levis Straus used indigo dye to make their now famous denim blue jeans in San Francisco. Today, the ajna chakra, or “Third Eye”, is associated with the color indigo (although not all systems of yoga agree with this color schematic). 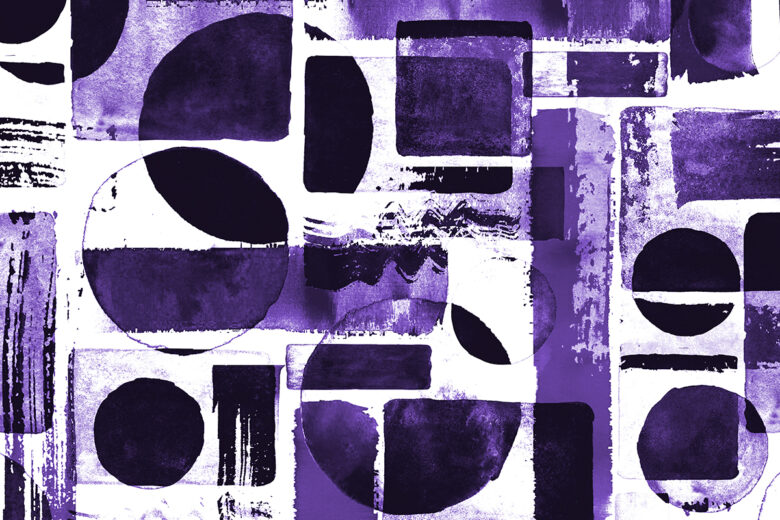 Indigo is rich in aesthetics and in meaning. In terms of color meaning, indigo is quite spiritual and mysterious in its symbolism. It’s the color of devotion, justice, creativity, dignity, and wisdom. Indigo is used in various cultures and celebrations including the vibrant Holi festival.

Let’s take a look at some of the technical color information and color code breakdowns for Indigo:

How to make indigo color

If you’re wondering how to make indigo color, it’s quite simple. The primary colors that combine to make indigo are red and blue. To make indigo, blue must be the dominant pigment in the equation. The exact equation to produce indigo is to mix one-third red and two-thirds blue.

Because you can never have too much of a good thing. 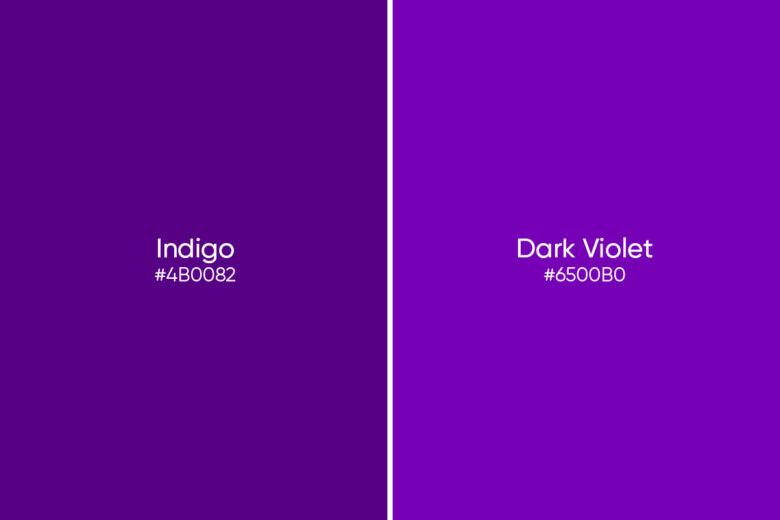 An alluring combination, for sure. 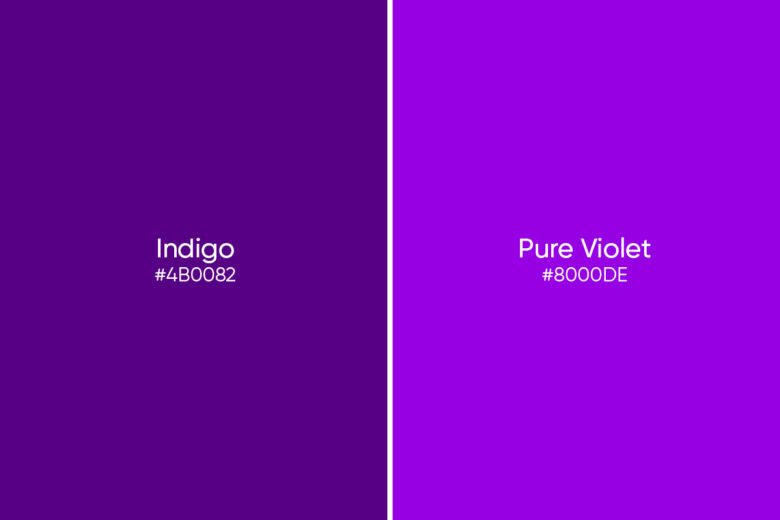 Indigo vs vivid violet or #980DFF

For when you want to take it up a notch. 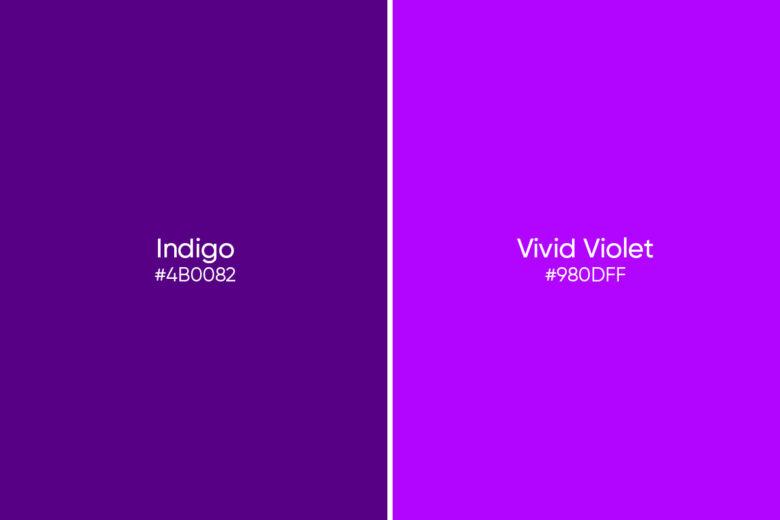 Indigo vs light violet or #AC3BFF

And if you want to show some restraint. 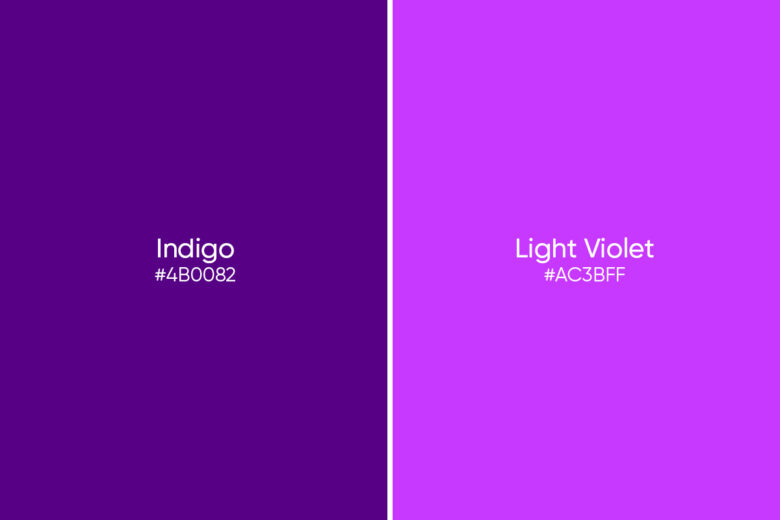 Or if your project requires a more deft touch. 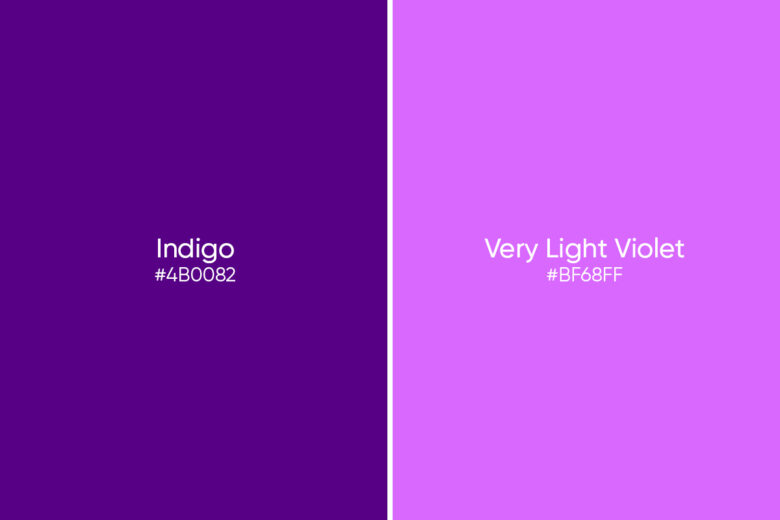 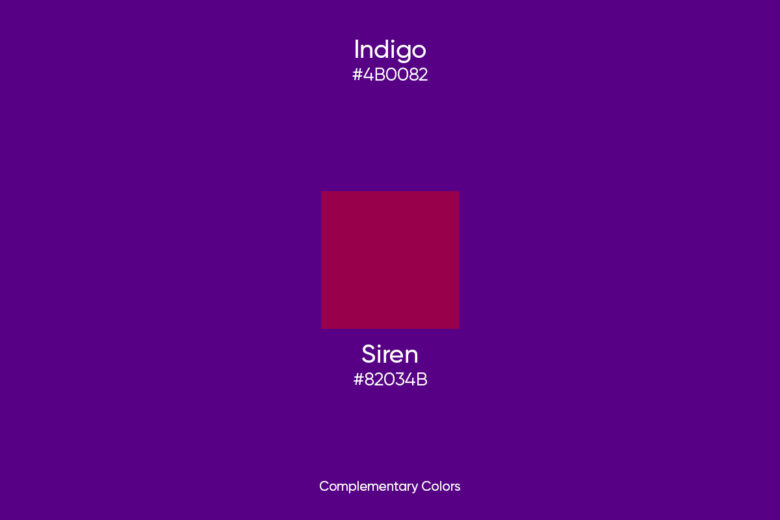 A split complementary scheme is composed of three colors. With Indigo, the other two complementing colors are anakiwa (hex #82ffff) and blueberry (hex #824bff). 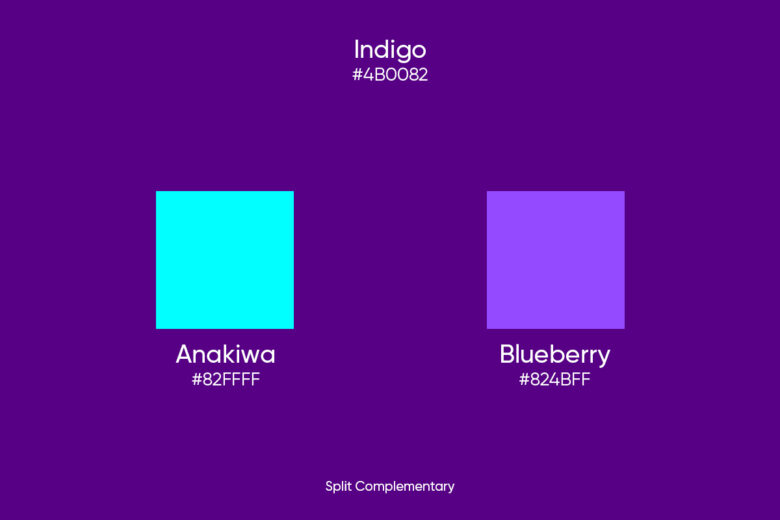 Triadic combinations are variants of the split complementary color scheme in which colors are found equally spaced on the color wheel. Indigo’s triadic components include tropical rain forest (hex #00824b) and cinnamon (hex #824b00). 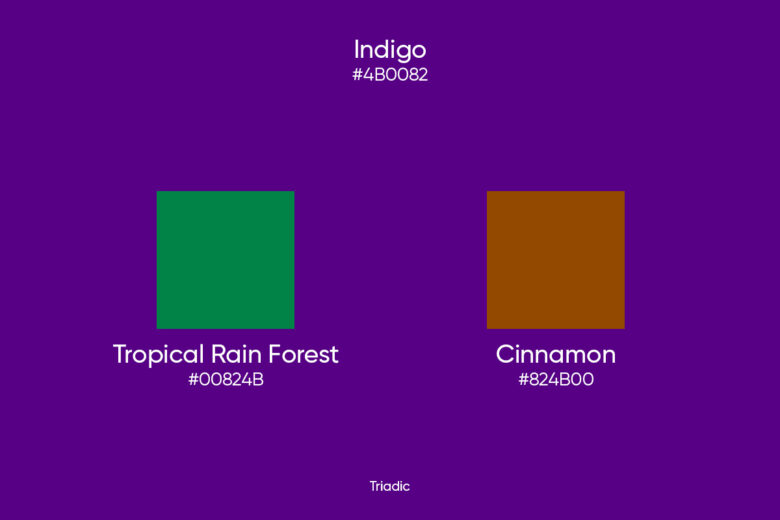 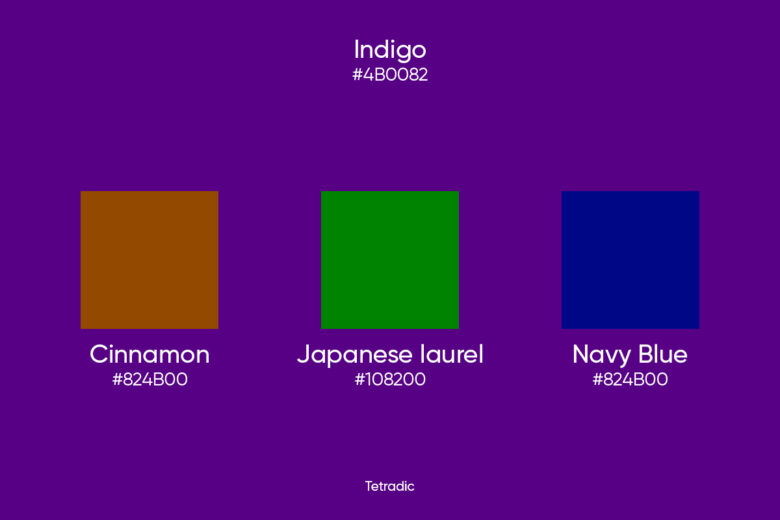 An analogous palette consists of three or more colors that are next to each other on the color wheel. For indigo, those colors are blueberry (hex #824bff) and pixie powder (hex #4b1382). 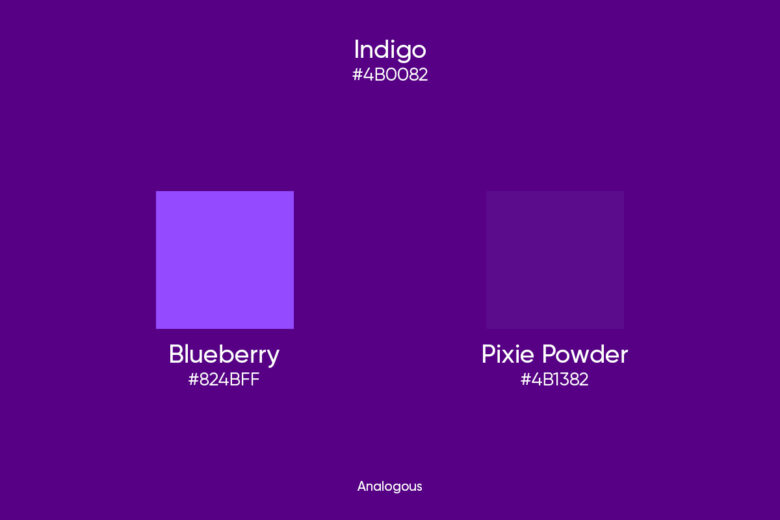 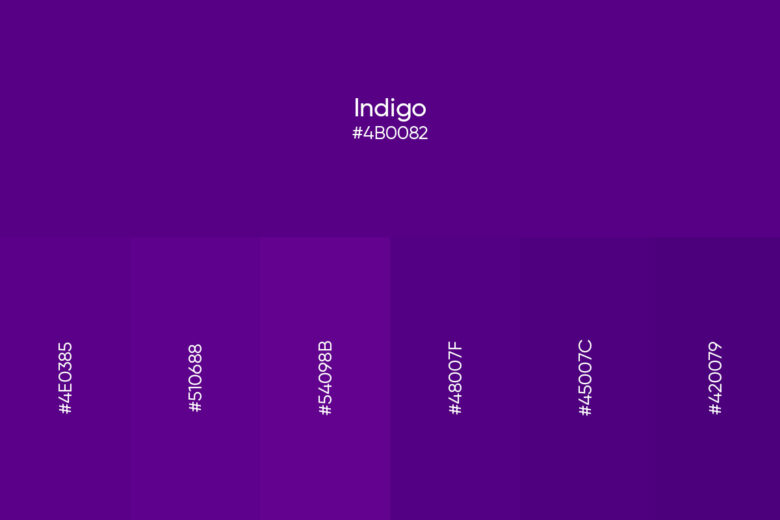 From technical color breakdowns and codes to creative color palettes, you should have all the inspiration you need to create indigo-themed designs of your own. Follow these easy instructions and incorporate your new favorite color into designs using Picsart.

1. If you’re looking for an online editing tool, open the Picsart Create page. Start a new design by selecting a template size, such as Instagram Square. 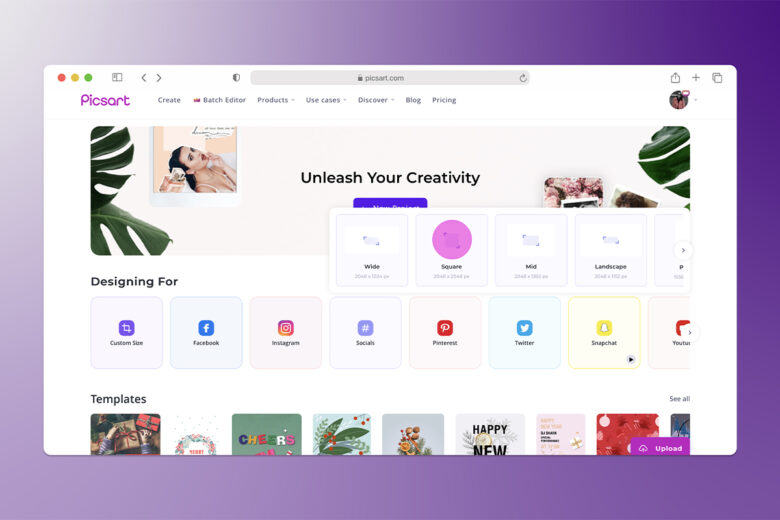 2. Select the Color or Gradient tool above your blank canvas. The Color tool will provide a solid background color versus a gradient. Type the color indigo hex code #4B0082 in the search box underneath the color box and hit enter. 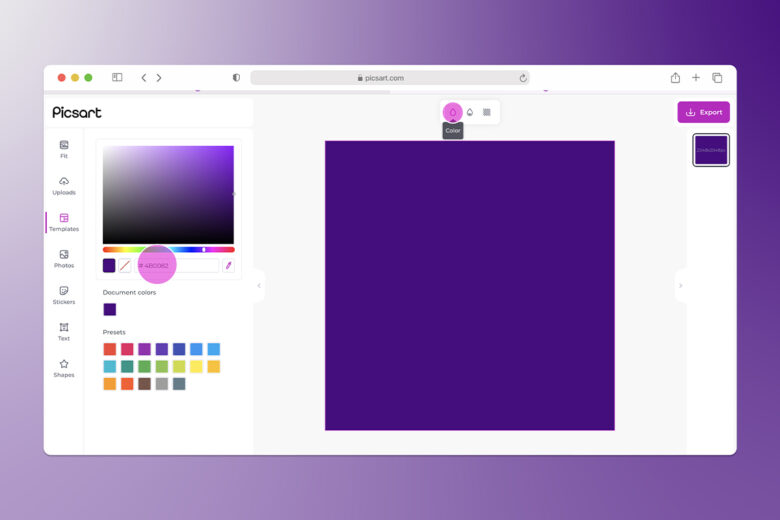 3. You can add to your design using Effects, Stickers, Text, and other tools shown on the left-hand side. 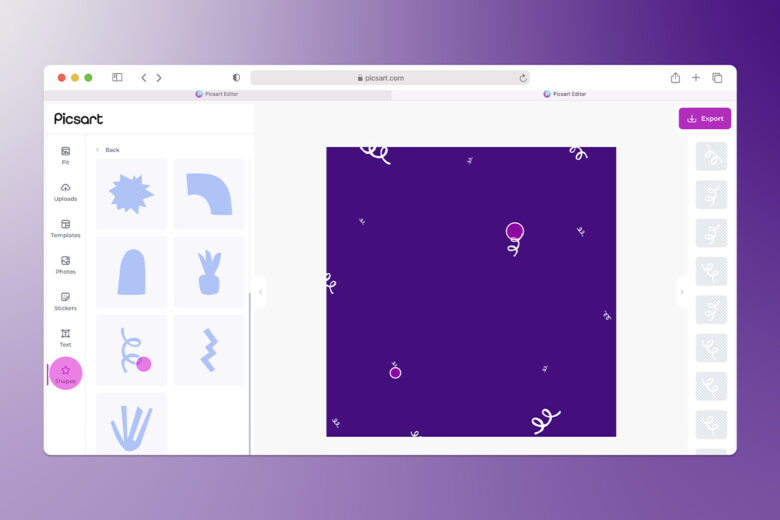 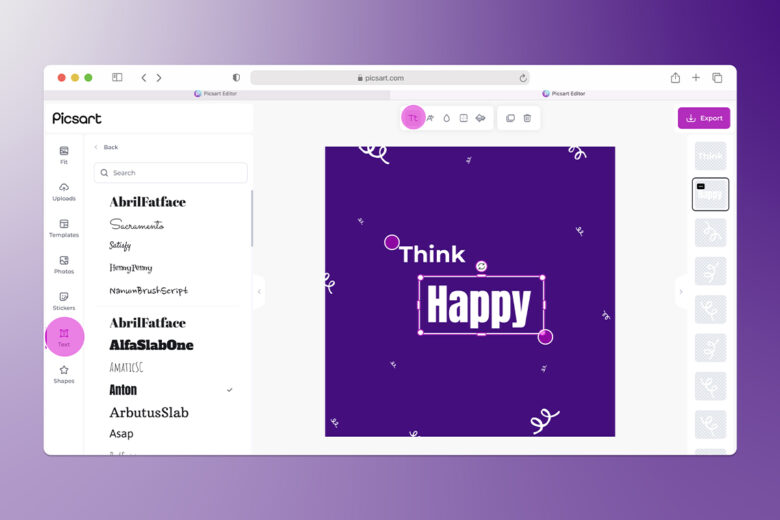 4. When you’re done with your indigo design click the Export button on the top right. 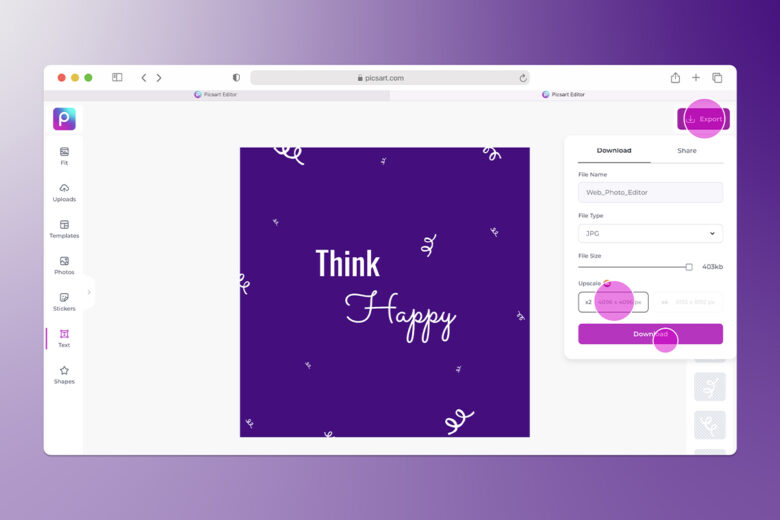 Editing on the go? No worries. Here’s how to do it using Picsart in-app.

1. Open the app and tap on the + symbol to start.
2. Scroll down to Color Backgrounds and choose Color Picker.
3. Input the code for indigo color. 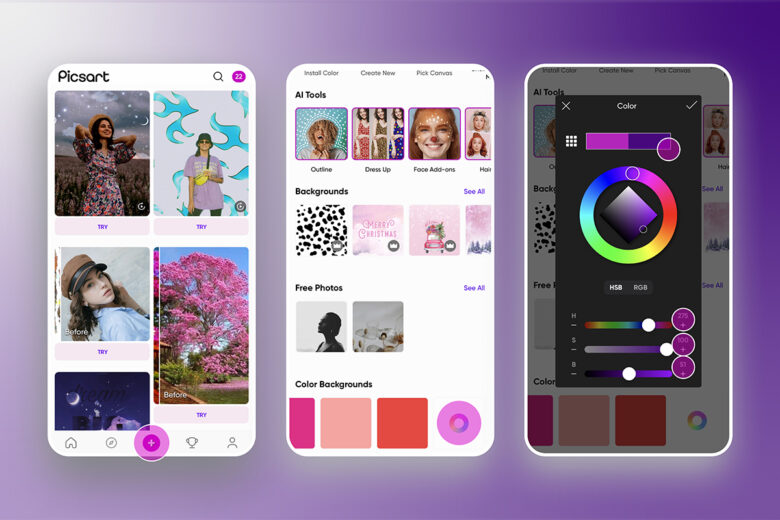 4. Tap on the Text tool to add some copy.
5. Input your text and adjust the font, sizing, placement, and more.
6. Tap on the Stickers tool. 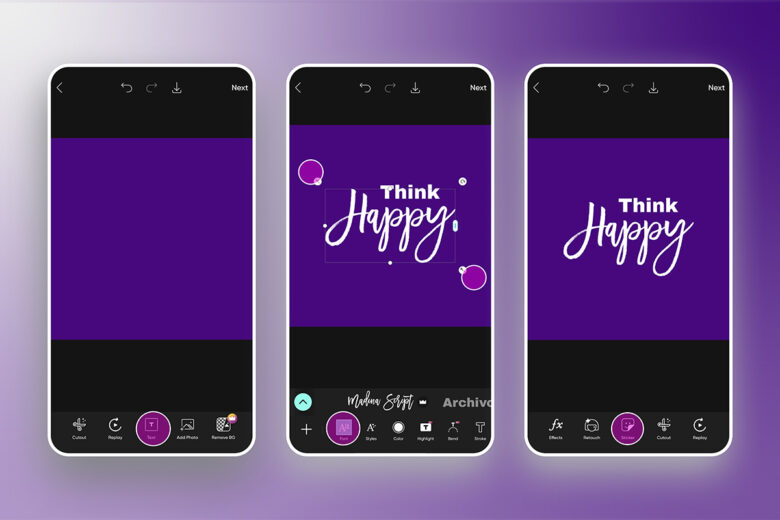 7. Add your stickers and tap on Next when you’re happy with the final design.
8. Tap on save or post. 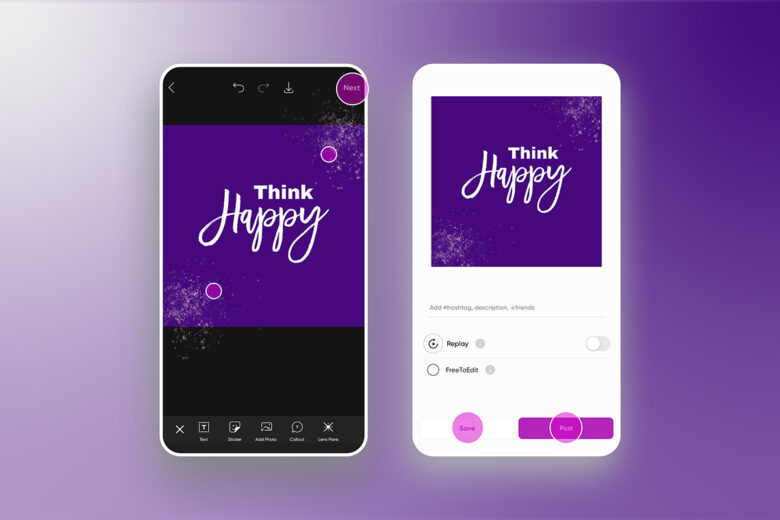 Picsart is a photo and video editing platform and creative community. A top 20 most downloaded app worldwide with over 150 million monthly active users, its AI-powered tools enable creators of all levels to design, edit, draw, and share content anywhere. The platform has amassed one of the largest open-source content collections in the world, including photos, stickers, backgrounds, templates, and more. Used by consumers, marketers, content creators and businesses, Picsart tools fulfill both personal and professional design needs. Picsart has collaborated with major artists and brands like BLACKPINK, Taylor Swift, Lizzo, Ariana Grande, Warner Bros. Entertainment, iHeartMedia, Condé Nast, and more. Download the app or start editing on web today, and upgrade to Gold for premium perks!

Circle crop an image the quick and easy way

How to remove objects, text and people from a picture

How to enhance a photo

How to add a tattoo to images using Picsart