By Spot, your guide to the best places in the world *for you* according to the friends and experts you trust.

It could be (and has been) said that Zach Stovall (@zachstovall in Spot) has the best job in the world. As the senior staff photographer for ISLANDS and Destinations Weddings & Honeymoons magazines, he travels constantly — sometimes multiple times a month. But while your standard-issue business trip plays out in stale conference rooms and sad hotel bars, Stovall is tasked with capturing the could-be-unreal scenes that will be splashed across glossy magazine spreads, inciting wanderlust in a readership that demands it. Given that the man knows his way around all types of scenery, from coastlines to mountaintops, and could probably take a decent photo with his eyes closed, we asked him to share five easy tips that anyone could use to take better landscape photos.

Check out his advice below. Happy snapping.

“Use Google Maps, Google Earth, and apps like WeatherTAP and Sun Seeker to scout and plan the best use of your time.”

“When in doubt, drag your butt out of bed early. Not only are there fewer people and things around to distract, but you’ll find a greater sense of peace and tranquility before the rest of the world is awake. The quality of light is just as good, and fog, which makes for extraordinary photos, is most often found at sunrise. No one will notice if you forget to put on pants.”

“Beginning photographers typically shoot with the sun positioned at their back, called a ‘fully lit’ position. This produces an even light, but is very flat. For greater contrast and dimension, use directional lighting, with the sun shining from the side at a 30- to 45-degree angle. Backlighting, or positioning the sun behind the subject, can be even more stunning by creating a rim light (halo effect) or contrast-y silhouettes. Also, winter months in the northern hemisphere generally see a lower sun angle, which makes for less harsh light in the middle of the day.”

“Clouds are important to landscapes. Puffy cumulus clouds rake or dapple sunlight over a scene and create interesting contrast with blue sky. Wispy cirrus and dotted cirrocumulus clouds make a painterly addition to a landscape, and also collect the subtle colors of sunrise and sunset, especially in the moments right before and after (respectively). As fronts move in, especially fronts leading storms, drama is sure to follow.”

5. Double Down on Focus

“Depth of field increases with higher aperture numbers. In other words, more is in focus from near to far as you approach higher aperture numbers, such as F11, F16, and F22. Conversely, a small aperture number like F2.8 means that your exact point of focus will be crisp, but really nothing else in front or behind it. If you want the nearest thing in the frame in focus (and everything behind it as well), you don’t actually want to focus right on it. Otherwise, objects in the far distance will be out of focus. Though it seems counterintuitive, you actually want to focus past the object (double the distance is the general rule). Then you adjust the aperture until you have enough depth of field to make both the object and its background in focus. Which f-stop you use will be dictated by your lighting conditions and what exactly you want in focus.” 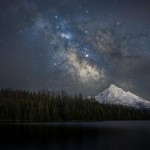 10 Photos of Stars That Are Out of This World 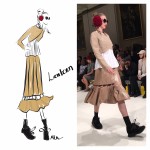 Illustrating Live From the Runway During London Fashion Week