The Why Women Project wants to see more women behind the scenes in creative fields. The project is a collective of women in media committed to telling intersectional stories, and its creators say time is up for the gender gap in production roles in media and film. We caught up with Why Women founder and editor, Cristina Cala, to kick off the Time’s Up Challenge featuring photos shot for the project.

Why did you decide to start The Why Women Project?

The project started in January of 2017 when a photographer friend and I were making plans to head to Washington, D.C. for the Women’s March. I wanted to do something to capture the motivation that was driving millions of women to come together for the same purpose, and I wanted women to tell the stories. I have always been fascinated by why people do things, what motivates them. So I asked about 10 women in my network in the media industry if they would like to collaborate on visual stories about why women were resisting.

How does Why Women align with the Time’s Up movement?

Time’s Up started as a movement to end sexual harassment. Time’s Up is a movement on broader gender issues as well. We’d like to extend the initiative to close the gender gap in professional opportunities for women. So, by working with female artists and creatives and supporting their work, The Why Women Project is saying, this opportunity is available to you where it may have been more difficult to find elsewhere.

Why is it important for women to work on the project?

Women should have a say in how our stories are told. For most of history, the majority of women have not had that opportunity. The narrative is that women are “emotional” and that it’s a bad quality is what we’re reclaiming to set The Why Women Project apart. We want to dig into those emotions—why women feel compelled, angry, scared or empowered, and how women turned those emotions into a powerful movement. Because emotions are behind the decisions we make, as human beings choosing empathy and kindness, or as voters who elect officials to represent us and protect our future. For the project, we want to work with voices we trust as well as voices we have not heard from before. So it’s why I called on the women in my network—which is something women do, we look for solidarity and community—but it’s also why I want to meet female artists and aspiring writers, photographers and filmmakers with perspectives that only they can bring. The project is not about just one storyteller, it’s about creative girls and women using their skills to turn something painful into collaborative action and art.

How can young artists be a part of the project?

READ  The #ToonPet Challenge is a Go and It's Pawsome!

They can join the community on social media and they can reach out to us to submit their work. Our email is on our Instagram profile. I hope that the project will grow into a community and platform for new voices to have a chance to get experience in a field they’d like to pursue.

How was the last Women’s March compared to the first one?

It’s strange to think back to only one year ago as a moment in history, but it was. After the election, it felt like something had been taken away from women. I went to the D.C. march last year and the one in New York this year, and 2017 and the first Women’s March had a specific heaviness, but also an intense energy. This year’s Women’s March felt a little bit wiser. We know our mission now, and we’re rising to it.

Where do women need to speak up and own their power?

At school, at work, in their daily interactions with others, and especially, when someone less privileged can benefit from having a friend and an ally. This is the era of girls rising up and speaking up for what they believe is right and going after what they dream, even if someone said not to. 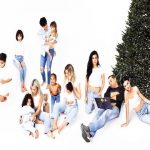 What Is the PicsArt CTO Doing In The Kardashian Christmas Card? Ask Our Employees.