Whether you’re American or not, you probably only have a vague idea of the variety of other-worldly landscapes that can be found in the enormous country that is the United States. Names like the Grand Canyon or Niagara Falls may instantly ring bells, but have you ever heard of the Garden of the Gods?

Well these are 17 landscapes that will illuminate the awe-inspiring natural beauty that can be found across the United States. We’re talking the kind of natural spectacles that bring time to a stand-still.

Taking you through these jagged cliffs, careening canyons, and snowy peaks are our PicsArtists, who have braved many a wilderness in search of the ultimate shot. Well here are 17 ultimate shots that explain why they call this country America the beautiful. 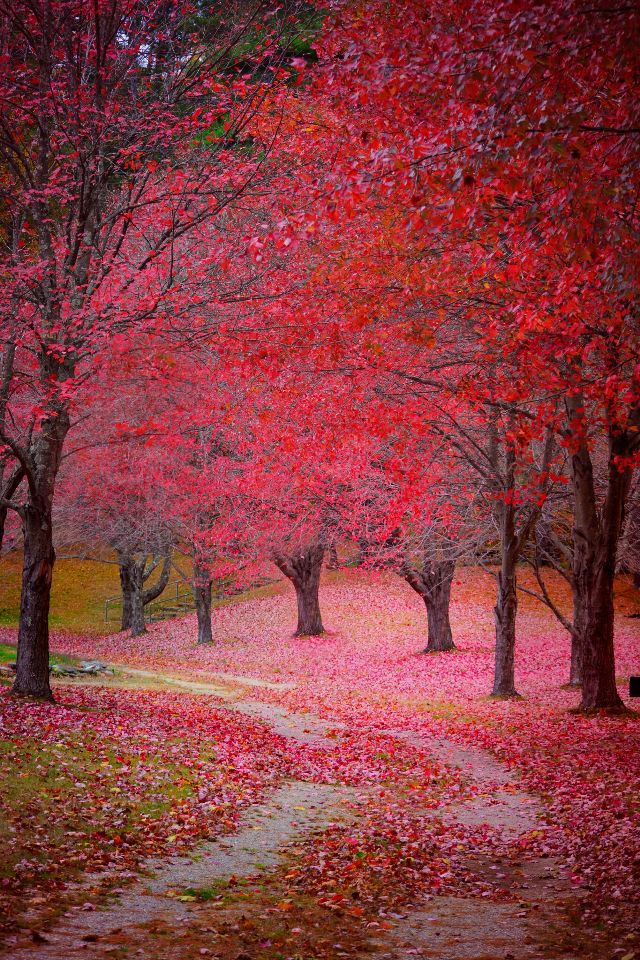 The forests of New England are where the pilgrims first glimpsed the amazing untouched land of the new world. Though the Northeast is rich in pristine coasts, green fields, and gorgeous mountain ranges, nothing is more famous than New England’s amazing Autumn forests, where it’s leaves turn shades of red so bold that they seem absolutely Martian. 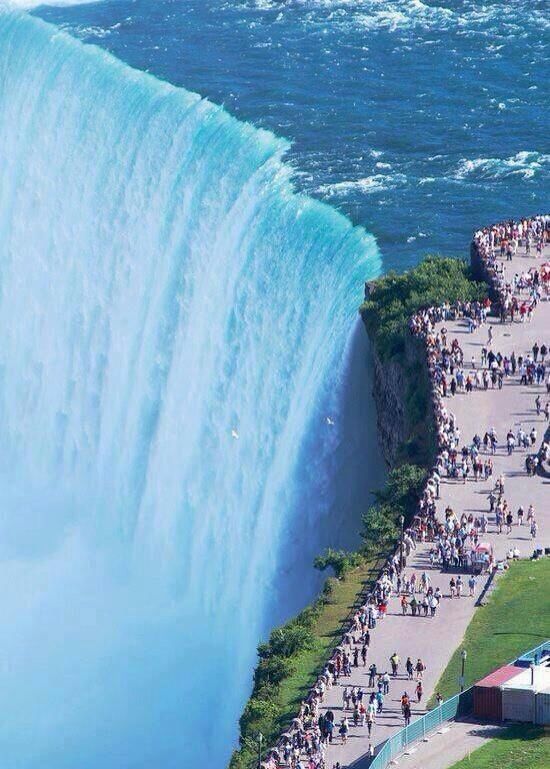 On the Northern border in the great state of New York, are the enormous Niagara Falls, three waterfalls whose towering flows are the highest in the world. The drop from top to bottom is 165 feet, and seeing the volumes of falling water is like watching an ocean pouring off the edge of the world. 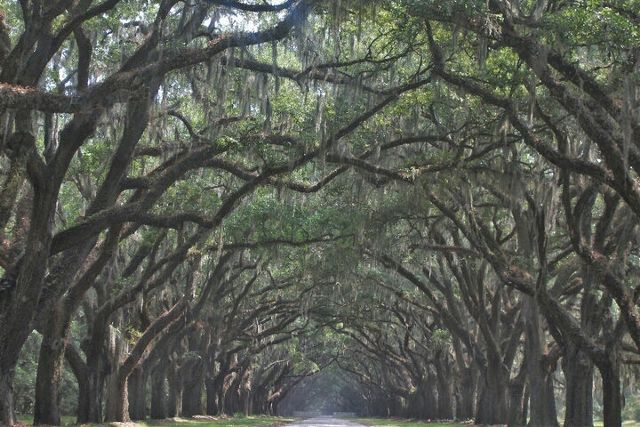 Shaped by the humidity of subtropical climate on the outskirts of the city of Savannah, the Wormsloe Historic Site is famous for its Spanish Moss laden oak trees, whose gangly branches form a canopy of dripping green strands. Once a plantation, the land is now preserved for its history, and under the right light, it can be rapturous. 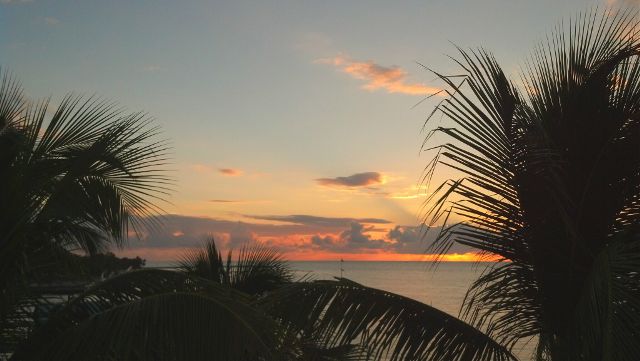 The Florida Keys are an archipelago of small islands that divide the Atlantic ocean from the Gulf of Mexico, sitting just a stones throw from Cuba. The snow white sands of these small islands sit atop coral reefs, surrounded by crystal waters populated by a full rainbow of marine life. 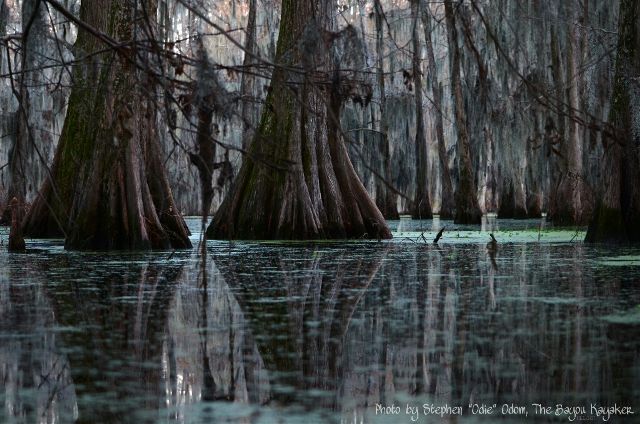 The swamplands of Louisiana are famous for their simmering stew of wildlife, anchored by marshy trees that sprout right from the steaming waters below. The environment can feel jurassic at times, but though the Bayou’s crocodiles may be frightening up close, they are magnificent from a safe distance. 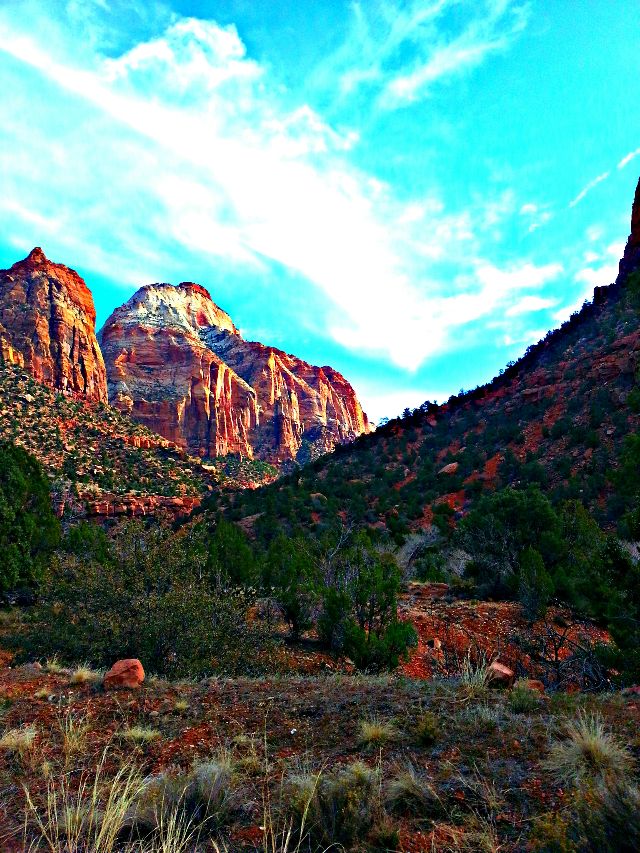 Zion National Park is the oldest of Utah’s parks, known for its narrow slot canyons and towering amber monoliths. These lands were once the home of ancient native tribes, dating back nearly 8,000 years, and it is a mystical experience to walk in their tracks in this rugged red landscape. 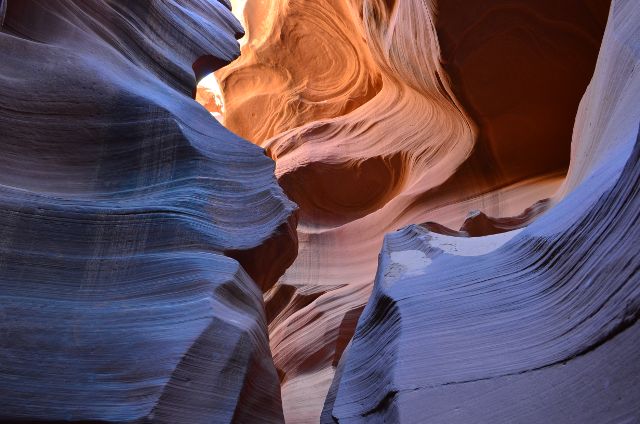 On the lands of the Navajo Native Americans, located near Northern Arizona, is one of the most surreal landscapes in the entire country. Antelope Canyon is a very narrow slot canyon formed by years of flash flooding, which have sculpted the sandstones into smooth swirling patterns that look like something out of a Salvador Dali painting. 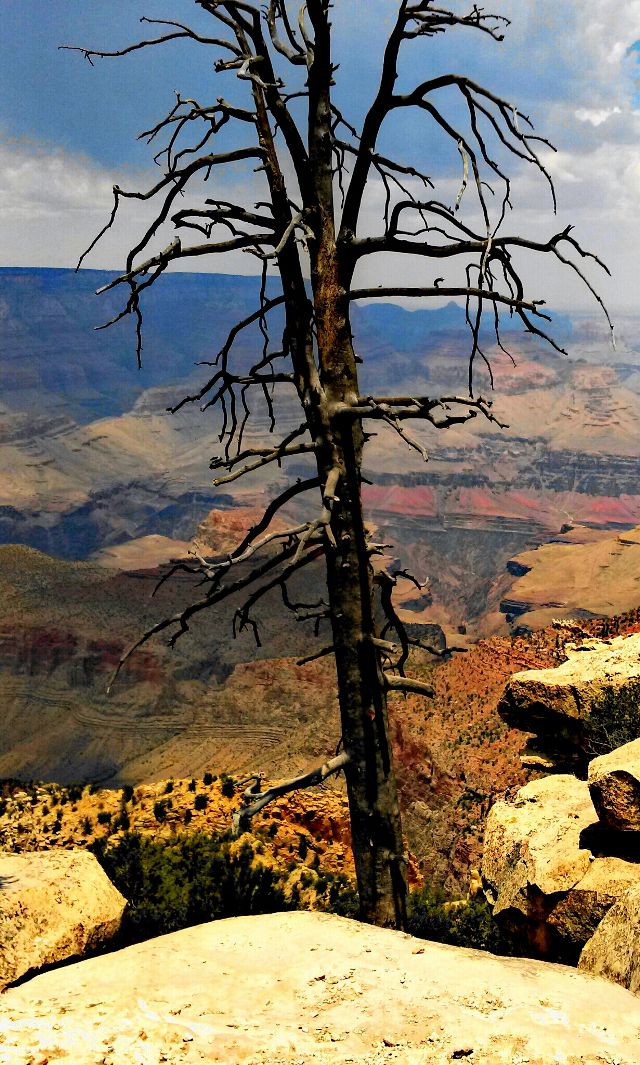 Famous the world over, it’s hard to capture the sheer size of the Grand Canyon in words and photos. Carved into the earth over a period of 17 million years by the Colorado River, the canyon’s enormity is overwhelming. It measures 18 miles in length, and at it’s deepest point, it could fit four Empire State Buildings stood on top of each other.

Garden of the Gods, Colorado 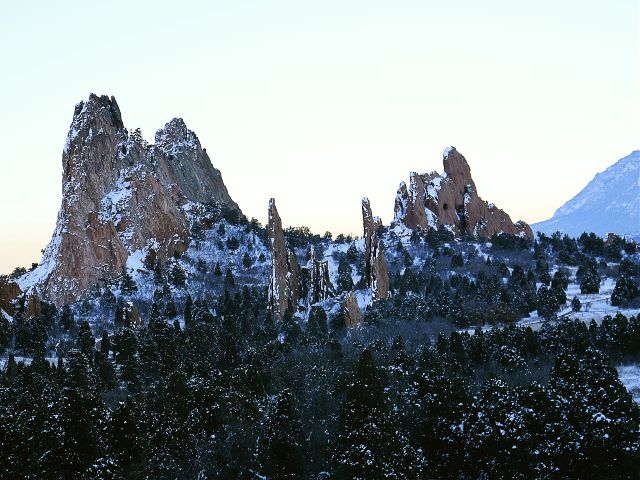 The Garden of the Gods is simply one of the most beautiful places on earth, where impossible blood red rock formations meet frosted alpine forests. The poet Helen Hunt once wrote, “You wind among rocks of every conceivable and inconceivable shape and size… all bright red, all motionless and silent, with a strange look of having been just stopped and held back in the very climax of some supernatural catastrophe.” 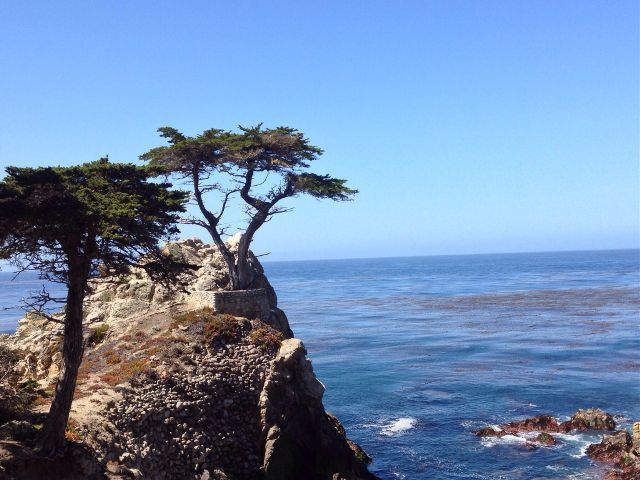 The Pacific Coast of California is marvelous from end to end, but for the sake of brevity, Pebble Beach is one of the coasts many exclamation marks. Clumps of Granite cut into the deep blue pacific, and atop the coastal rocks sprout dramatic Monterey Pines. 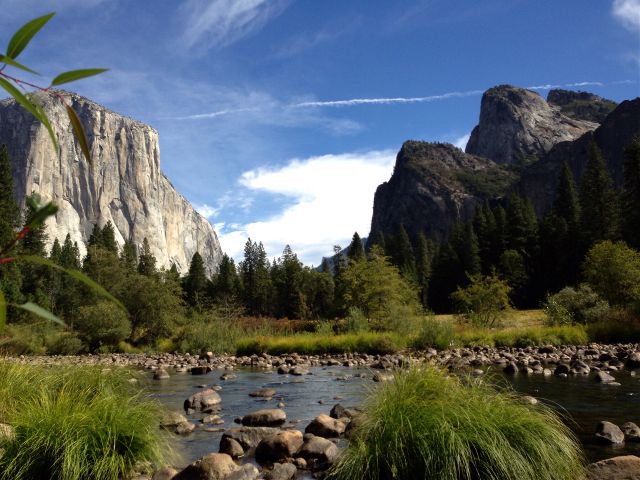 Yosemite is a pristine natural paradise, with deep valleys, rugged cliffs, glistening rivers, and groves of sequoia trees whose lives began in ancient history. A plethora of wildlife lives in this lush landscape on the Western Slopes of the Sierra Nevada mountains.

The Waterfalls of Oregon 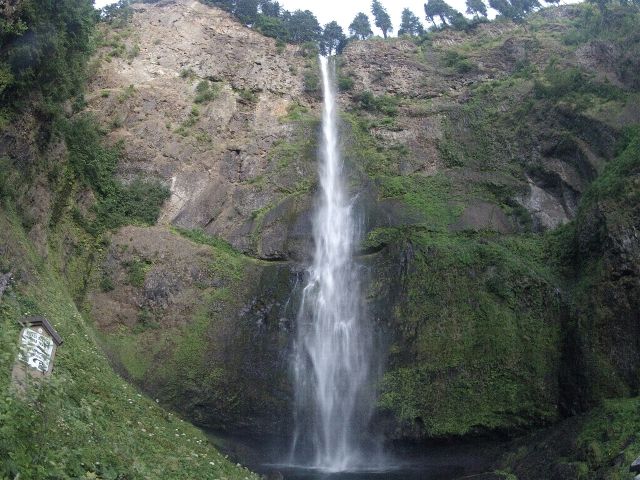 All throughout inland Oregon’s deep green landscapes are the country’s most picturesque waterfalls. Oregon is covered in heavily forested mountains and crystal clear rivers, which lead to misty flows of water falling from lofty heights, and trickling out across mossy cliff faces. 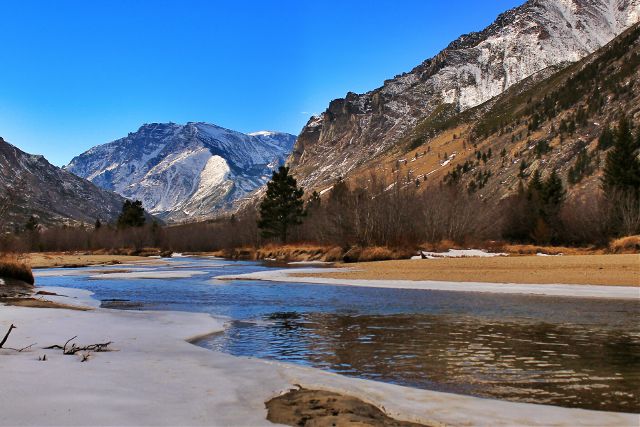 The Beartooth mountains are a remote bastion of natural beauty like no other, seated on the largest high elevation plateau in America. Nested in their valleys are glacial lakes and a host of exotic animals like bighorn sheep, wolverines, lynxes, moose, and grizzlies. 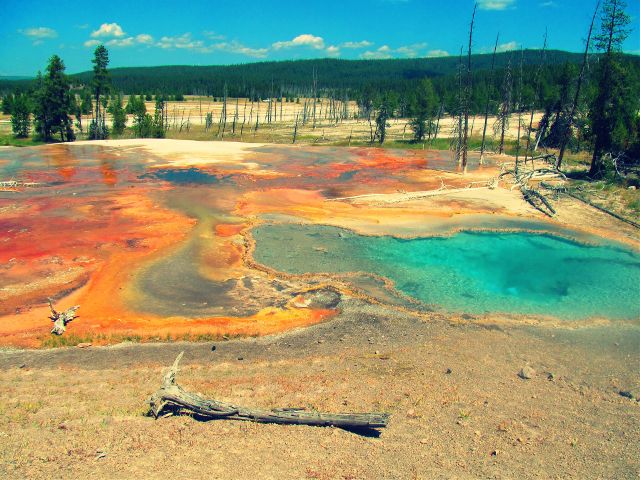 As the world’s first and perhaps most famous National Park, Yellowstone is a place where nature does unbelievable things. Sprawled over a dormant supervolcano, Yellowstone is a hotbed of geothermal activity, with steaming pools of sulfuric waters and bursting geysers. One of the park’s most iconic features are the psychedelic colors that naturally form on the edges of its thermal pools. 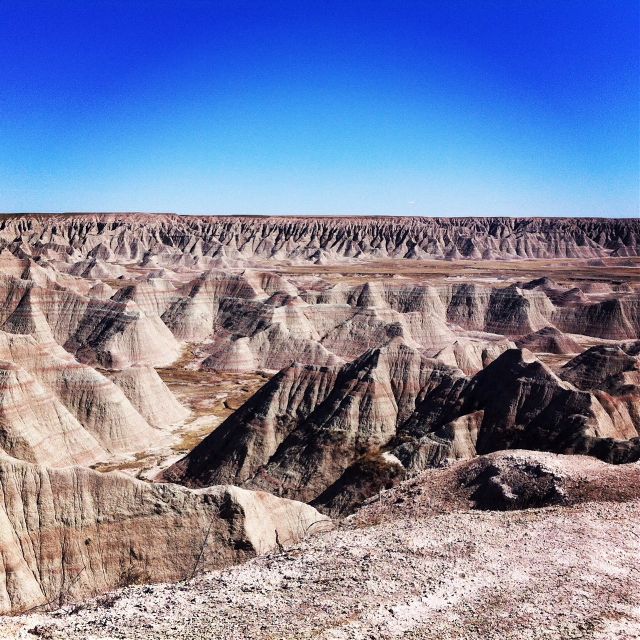 The Badlands of South Dakota are one of the most unique landscapes in the country, where prairie is punctuated by miles of hills that have been eroded into rocky spires. This jagged terrain is also a goldmine of prehistoric fossils of enormous jungle cats and charging rhinos, long since extinct from the region, though enormous bison still roam the park’s grasslands. 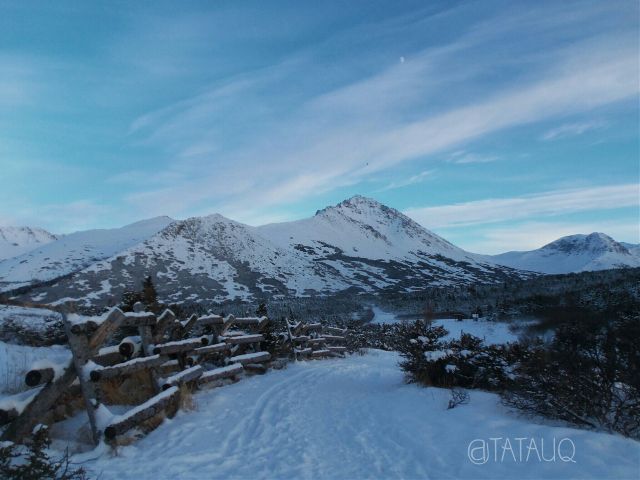 Alaska is a subarctic wonderland, a wilderness twice the size of Texas with a population one tenth the size of New York City. All kinds of creatures lurk in its snowy mountains and along its icy shores, from grizzlies to killer whales. The Northern Lights are clearly visible in the North, and if you make it that far, you would be forgiven for thinking you left the planet. 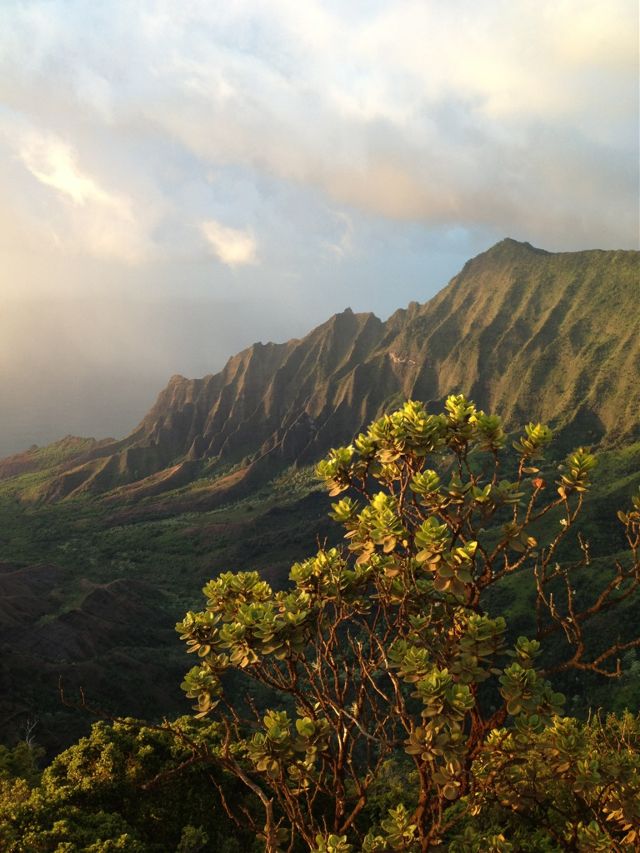 Adrift in the abyss of the mammoth Pacific ocean, the Hawaiian Islands are a tropical paradise that can amaze you in so many ways, from their fiery volcanoes to their sunny beaches. If you want to discover their wildlife, however, the Kalalau Valley on the island of Kauaʻi won’t disappoint. The steamy valley has a tropical rainforest climate and can only legally be accessed by hiking or Kayak, and is anchored by green cliffs as high as 2,000 feet. 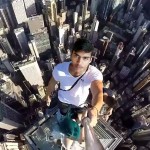 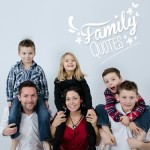 Cherish your Loved Ones with Family Quotes Clipart